*BAC Students with ID pay only $10 for admission*
From the New York Times, Nicolai Ouroussoff:

"The show offers no new insight into his life’s work. Nor is there any real sense of what makes him so controversial. It’s a chaste show, as if the Guggenheim, which is celebrating its 50th anniversary, was determined to make Wright fit for civilized company.

The advantage of this low-key approach is that it puts the emphasis back where it belongs: on the work. There are more than 200 drawings, many never exhibited publicly before. More than a dozen scale models, some commissioned for the show, give a strong sense of the lucidity of his designs and the intimate relationship between building and landscape that was such a central theme of his art." Read more *here*. 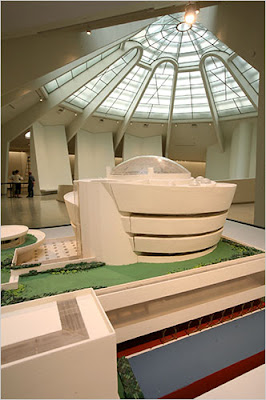