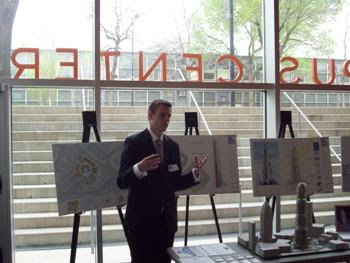 CHICAGO, MAY 2009 | For one weekend in May, the campus of the Illinois Institute of Technology (IIT) was the center of the tall-building universe. Fortunate patrons were treated to an exhibition from an advanced architectural studio for IIT students which focused on the design of a skyscraper for Mumbai, India sponsored by the Council of Tall Buildings and Urban Habitat. Additionally, the finals of the inaugural Mock Firms National Skyscraper Challenge was also taking place in the ballroom of the McCormick Tribune Campus Center.

The Mock Architecture Firm Competition is an exciting and innovative opportunity for students interested in the design/build industry to test their skills in a uniquely collaborative environment and against peers on a national level. Students were asked to establish and organize their own firm consisting of a maximum of 4 principals (partners) and an unlimited number of student-employees. This year’s theme was “No Fear of Heights!” As the skyscraper has once again become a focal point of architectural conversation around the world, we challenged students to design and build an iconic structure to be located in the locale of their choice. The specific challenge was to carry-out their design concepts for a mixed-use tall-building through the use of drawings, models, illustrations, video and oral presentations to be judged by some of the country's top architects at a 2-day finals event hosted by the College of Architecture at IIT on the Southside of Chicago.

Eleven finalists with nine present competed for top honors after an initial selection back in February which was based on the quality of submitted sketches and building concepts. A total of 22 secondary and post-secondary institutions entered the 2-division competition from the East Coast to the West Coast. As contestants arrived by air, rail and roadway, they were introduced to the Chicago's best via a walking tour through Millennium Park, Lakeshore East, and River North with a stop-over for some Chicago-styled hotdogs at Portillo's an Barnelli's.finals event hosted by the College of Architecture at IIT on the Southside of Chicago.

Students arrived to set-up for judging on the second day of the event in an exhibition/display-type format. Students were then expected to present their prepared materials and "sell" their designs to each judge as they individually evaluated each project. Present in hand for the jury process was Martin Wolf FAIA, Senior Principal and Principal-in-Charge of Design for Solomon, Cordwell and Buenz, Ross Wimer AIA, Design Partner, Skidmore, Owings and Merrill, Stephen Yas AIA, RIBA President and Owner of Yas Architecture, LLC, Antony Wood, Executive Director of the Council on Tall Buildings and Urban Habitat, and Jan Klerks, Research & Communications Manager, CTBUH.

Upon entering, jury members were taken aback at the level of quality present in the projects submitted for judging. Among comments given were, "was that a mock firm or an actual firm?" and, "this is a great competition and more schools need to know about it." and finally, "I need to get my son and his school involved in this, this is great!" Most of the awe was directed at the high school entrants as they produced a level of work nearly mirroring their collegiate counterparts.

The competitive weekend concluded with participants, teachers, family and friends gathering for an Awards Dinner at a downtown Chicago pizza establishment. Multiple awards and and top honors were presented to student firms at the back-end of the affair. In reflection of their overall experience, students themselves gave praise and recognition to the value of time-management learned, the satisfaction of seeing their completed projects, and the opportunity to receive professional and unbiased reviews from a jury top-shelf architects. The following is a list of finalists and honors achieved.