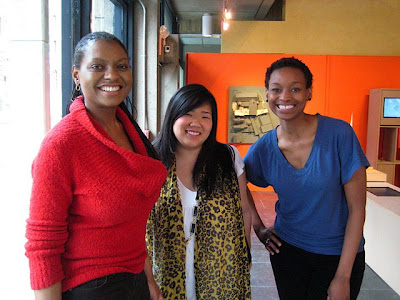 Jacqueline Maldonado, NOMAS President, is a third-year degree candidate in architecture at the BAC. Her architecture internship in Ballpark Planning and Development (for the Boston Red Sox) led to an Independent Study for the United Neighbors of Lower Roxbury, to revitalize their community center. Her experience at Moskow Linn Architects includes collaborating on the Boston Logan Airport 9-11 Memorial, Sustainable Facilities (MacGraw-Hill 2008), and the Swamp Hut (Newton, MA) -- this month's feature in Architectural Record. As a native of Uganda, she feels a sense of pride in taking on the leadership role of BAC NOMAS chapter President 2009.

Thalia Lewis, NOMAS Vice President, is a 3rd year Master of Architecture candidate. She is originally from Montreal, Canada. Thalia is currently working for effortless design, inc., a design/build firm working out of New Bedford, MA. (visit the blog on their ongoing Smart Growth project). Thalia's passion project for the Spring 2009 semester was the NOMAS model-building workshop, which she hopes to make a regular event at the BAC in future semesters. She is strongly committed to fostering the spirit of inclusion and making NOMAS a vital part of the BAC community. As former President Clinton has said, "We need all our people. We do not have a person to waste."

Whitney Maehara, NOMAS Secretary, is in her third year at the BAC as a Bachelor of Architecture candidate. She is originally from Seattle, Washington and keeps her connection with the West Coast by way of various independent design projects in the area. Having traveled through all of Asia the year before she came to the BAC, she hopes to use BAC NOMAS as a vehicle in which to share her experiences abroad with others, as well as learn of other’s personal experiences thereby creating a more culturally aware community at the BAC.
* * * * *
NOMAS (National Organization of Minority Architecture Students) is the student branch of NOMA. The mission of the National Organization of Minority Architects is to encourage cultural diversity in the field of architecture, by 1) creating awareness and giving greater visibility to architects of diverse cultural backgrounds, and 2) by offering support and inspiration to young minorities who aspire to careers in architecture.


The BAC Chapter of NOMAS is about the spirit of inclusion, and we absolutely welcome your participation whether you consider yourself a minority or not. Get involved! Diversity in architecture enriches the profession as a whole: as a student body we can accomplish great things. We welcome your support in making our chapter of NOMAS a vital and active part of the architectural community.