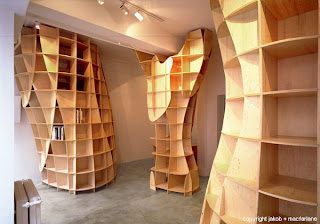 Jakob+MacFarlane, a Paris-based firm that was founded in 1994, works on institutional, commercial, and residential projects. The restaurant and the pink bar at the Georges Pompidou Center in Paris are probably the firm's most well known projects. Other designs include theaters, art galleries, and small houses and apartment complexes. 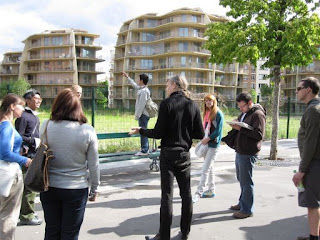 Dominique Jakob studied at l'Ecole d'architecture de Paris-Villemin, and Brendan MacFarlane attended Sci-Arc in Los Angeles. He went on to earn his graduate degree at Harvard's GSD in 1990. After creating their firm, in 1995 they also founded Peripheriques with two colleagues. 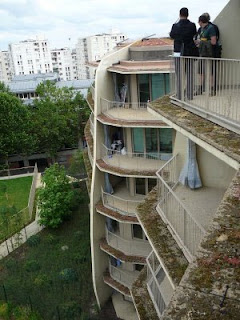 The idea of the floor-wall-ceiling, in which the surfaces flow into each other and are indistinguishable, is a common theme in Jakob+MacFarlene's design. This can clearly be seen at the Pompidou Center and the T House (1994). The Fondation Ricard and the Loewy Bookshop, both also in Paris, are a variation on this idea - they feature curvy bookcases that define the spaces. 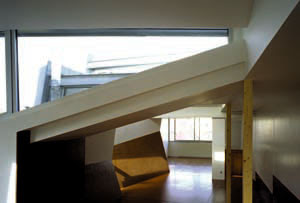 
A recently completed, exciting project is the renovation of the Docks in Paris, where the firm designed offices and exhibition spaces, as well as shops. The building is on the river and a portion, a la the Pompidou Center staircase, overhangs the water. The wrought-iron and glass panels, some in shades of green, is oganic in form, creating a "green snake." It also features a green roof.