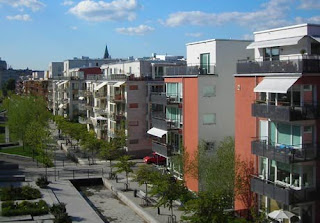 The coolest part of Hammarby Sjostad, a new eco-neighborhood of Stockholm, is the trash. It gets sucked through pneumatic tubes - at 43 mph (70 km/hr) - after residents drop their household waste into special chutes: one for food that will get composted, another for paper to be recycled, and a third for garbage that can be burned. As the latter gets incinerated, the energy produced is converted into district heating and electricity. The goal is both to keep garbage out of landfills and ultimately to produce half the the neighborhood's energy.

"Everything people are throwing away is coming back in one way or another," says Hammarby spokesman Erik Freudenthal. And that includes sewage. It gets turned into fertilizer as well as biogas, which is used to fuel buses, taxis, and approximately 1,000 gas stoves. Yum!

For a video of the tubes in action, visit Time.com/Hammarby.
For more information on the neighborhood, visit Living Green in Sweden.
Sustainable Design