(The Museum of Contemporary Art. All photos: Julio Cedano) 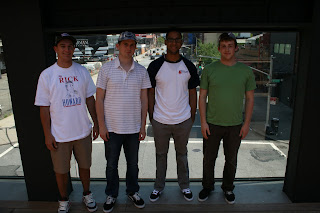 The wonderful thing about New York is that there are so many well-known buildings and architectural features at every turn. Just while walking the High Line, the group saw Frank Ghery's IAC Headquarters building and the new Standard Hotel designed by Polshek Partnership. 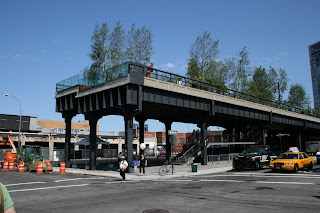 "I had traveled to New York before, but usually to visit friends," says Julio. "I'd never gone on a tour of the architecture there. It was exciting, because I had never seen these famous buildings before."

York's elevated public park on the West Side. The park, which just opened this past June, was originally built in the 1930s for freight train traffic. It now features an integrated landscape, designed by landscape architects James Corner Field Operations, with architects Diller Scofidio + Renfro, combining meandering concrete pathways with naturalistic plantings.


"I love the idea of taking an existing structure and turning it into something usable and something green," says Julio. "I was especially intrigued by the design by the architects. I heard that they took pictures of the tracks in their denigrated state before the project and thought the weeds growing out the rails were cool, so they integrated that in their own design." 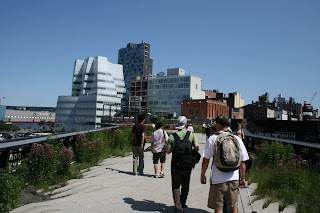 Julio also liked the layout of the stone, which mimics the tracks somewhat, and the projecting benches, which are extensions of the ground stone. His favorite spot, though, is the stadium seating. "I loved looking down at the street," Julio says. "It was neat to get a different perspective on the street and the buildings. It reminded me of another Diller Scofidio + renfro project, the ICA Museum in Boston, with that one room that slopes down and has a large picture window to the water below." 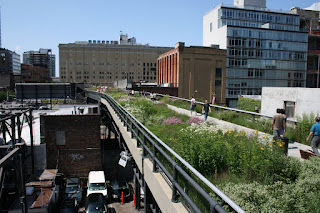 Now that Julio has returned to Boston and is back at work as project support at Beacon Architectural Associates and back at school in the fall, he can bring all that he learned from his Nwe York trip to his new projects. "I was definitely inspired!," he says. 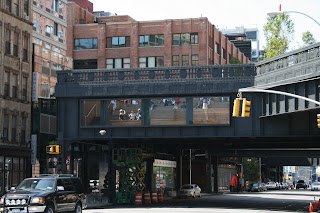