The Future of the Curio House 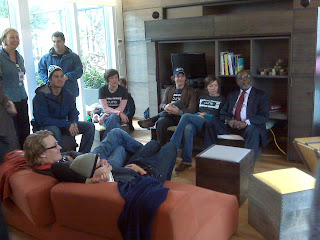 (Inside the Curio House on the National Mall, October 2009)

Our sustainable Solar Decathlon project Curio House, built with Tufts University, was awarded 17th place in this year’s international competition. Fifty schools submitted applications to compete, 20 were selected to design and build projects on the Mall in Washington, and the winning team was from Darmstadt, Germany. The BAC/Tufts Curio House was one of only a few that was designed and built entirely by students, and was one of the few built without government support. 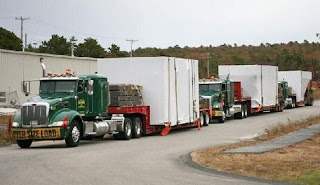 (The Curio house in three modules being transported to Cape Cod, MA. The Cape Cod Times)
After the competition, the Curio House was disassembled and trucked back to Massachusetts, where it has been sold to the Housing Assistance Corporation on Cape Cod, to serve as the prototype for a sustainable community on the Cape. A homeless couple has already been selected to move into the house once it is reconstructed next spring.

Our student team brought together the entire BAC community behind their truly visionary and altruistic intention of providing an affordable, feasible, and sustainable home that meets the needs of the homeless. As we are assessing how we may transfer what we have learned from this project to other hands-on student projects closer to home, we extend our deep appreciation, gratitude, and hearty congratulations to the Curio House student team, and our thanks to the team’s many supporters.
Solar Decathlon Sustainable Design