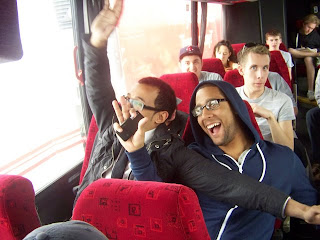 BAC in DC Trip: The Solar Decathlon
By Rilwan Kujenya

Last month I had the chance to travel back down to my third favorite city, after Boston and New York: Washington DC. The trip was fun, despite the bottom-numbing 8 hours going the there and the frustrating 12-hours coming back due to a bus breakdown. When I got there, my roommate (and fellow schoolmate) from Boston, Mike, and I stayed at his sister's apartment in the Chinatown neighborhood. 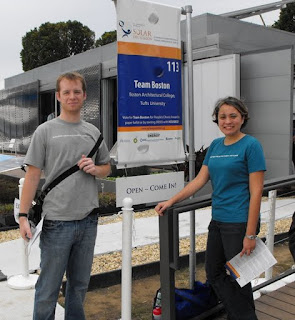 We woke up early on Saturday morning to head to the National Mall, battling the humidity that is typical of DC. For three weeks in October, the Mall was home to twenty houses designed by architecture and engineering schools from across the nation. There were a few international entries as well, including Canada, Spain, and Germany. The students were competing in the U.S. Department of Energy's Solar Decathlon Competition, which aims to increase awareness of solar technologies in home construction, attest the viability of solar systems, and push students to the limits to create an inspiring vision for the future generation of American houses. 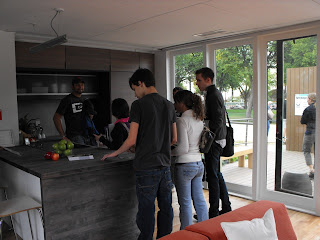 Of the homes showcased, Team Boston's Curio House (a collaboration between Boston Architectural College and Tufts University) was my favorite, but there were some heavy competitors. The University of Minnesota's Icon House was a formidable crowd-pleaser. Their pitch was to design a sustainable house that is not intimidating and seems familiar by adopting this hybrid style of the typical American Gabled-Roof home and the typical solar panel home. The house was fabulously designed with a lovable exterior and cozy interior. Other competitors worth noting were the super high-tech and experimental Seed Pod by University of Arizona, the incredibly affordable Zerow House by Rice University, the super-posh Lumenhaus by Virginia Tech, the agro-industrial Silo House by Cornell University. 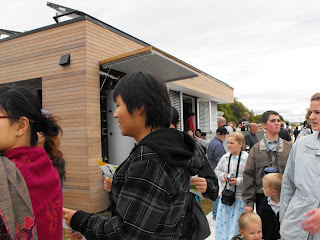 Of course, despite all of the hard work that the students put in, there were some projects that were questionable. The Spanish Black and White house drew in a large crowd, but perhaps only because its zaniness had to have been seen up close. I thought that the pivoting roof was ingenious, but the house was otherwise ugly and flimsy. The mix of cheap interior finishes and iconic modern furniture did not fair well with much of the visitors. The ceiling boards were cracked, the exterior doors were scratching the marble-tiled patio, and the funky surrealist sculpture set in the house's garden pond was swaying in the wind, practically ready to tip over at any minute. The house's space-aged design was definitely unforgettable, but unfortunately, not in the good way.

On the other hand, the Curio house was a solid competitor. It has a quality that many of the other houses seem to lack: a real sense of space. The house truly felt like a comfortable place to relax. The plan was excellent, especially considering how the yard space and interior space worked harmoniously and felt like one. There was this honest feeling that the house was truly bigger than it really was.
Solar Decathlon Travel