The Allston Branch of the Boston Public Library, a simultaneously modern and rustic looking building, stands out from its neighbors, New England-style houses and small apartment buildings. The striking contrast of light sand-like stones and dark gray stones on the facades bears little resemblance to the faded paint of the residences surrounding the library. 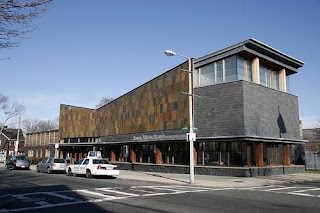 (Photo: http://www.flickr.com/photos/darajan/416594990/in/photostream)
Although the building was constructed in 2001, it is not the first time the BPL has had a branch in Allston. The library's location had moved many times before it was closed due to lack of available funds, forcing Allston residents to wait twenty years before a new library would open.

Boston-based firm Machado & Silvetti Associates, Inc., worked with the community to come up with a design that pleased all parties involved. Bernard Margolis, president of the BPL,
says, “the end result is a fantastically well-received building now being overwhelmed with significant public use.” There is no denying that the space is well used. The library's various resources see significant use even during weekdays. 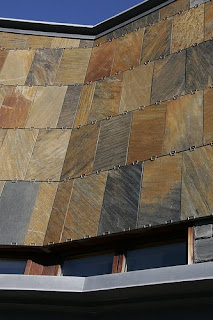 (Photo: http://www.flickr.com/photos/darajan/416594990/in/photostream)
Where the entrance is located, the facade is uniquely shaped. It is as if a straight line has been bent by something a quarter of the way in from its left side, creating sharp angles. Underneath is a mixture of sand-colored stones, comprised of equally sized squares in various shades. The flat stones do not extend to the edge of the building though. On the right are dark gray-colored stones that interrupt the pattern of the lighter ones. Above these is a large window that meets a second window of the same size from the other side at its apex, which is offset from the side of the building.
The left half of the building varies from the right. There are no bent angles and the materials vary slightly, but keep the same feel. The top half consists of wooden boards, which currently have a light color, similar to that of the sand-colored stones, but which will fade with time to look more like the dark gray-colored stone underneath. 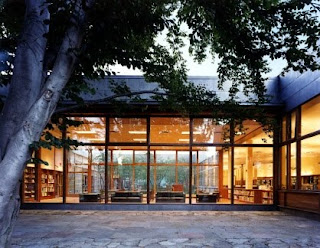 (Photo: http://www.nikiomahe.com/architecture-design/honan-allston-branch-of-the-boston-public-library)
The interior is subtle when compared to the exterior, with a soft color palette that lacks the sharp contrast seen outside. The walls are an off-white/cream color and the bookshelves made of medium toned wood. Unlike the Copley Square BPL, with a multitude of confusing rooms and
levels, the organization of this library is clear. The Honan-Allston library has simple and symmetrical design with the children and adult sections mirroring one another. A myriad of windows and few walls give an open feeling to the space, which is further aided by tall walls allowing for a high ceiling. In the courtyard, additional spaces are offered for reading, including tables and an area with leather chairs that offers views of outside gardens. They are, of course, not practical for the winter season, but add an extra, special area for reading during the warmer months. There is even a special beech tree, preserved by the design, set off on one side. 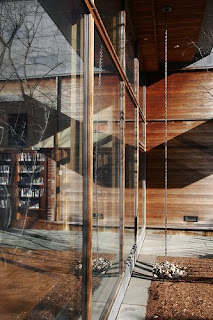 (Photo: http://www.flickr.com/photos/darajan/416596088/in/photostream)
The design for the Allston BPL by Machado and Silvetti is unique compared to its surroundings in a way that would strike anyone casually walking by. There is not much depth to
explore, though, other than the contrasting color and materials, and the pictures and drawings on the designers’ website provide enough insight that there would be no real value in planning a special trip to see it. However, the design and plan were well thought out, providing a positive
feeling and making it an exceptional place for its every-day users.