LOT/EK IN BOSTON :: Words and Photos by Jeff Stein

May 19, 2010
In a darkened auditorium at the MIT media lab, Marvin Minsky, sitting in the next seat, turns to me. Toshiba Professor of Media Arts and Sciences, Dr. Minsky is an artificial intelligence pioneer, author, and a researcher into cognitive psychology and computational linguistics, into how the mind works, how we think. We are both in the audience to hear a lecture on design.

The answer may be that while we do not often make buildings with building blocks, we are in fact beginning to do that sometimes. We did so just this past summer, on Fan Pier in Boston. The building, Puma City was an 11,000 square foot mobile retail and event space, and bar made from 24 big building blocks: 40-foot long, steel, trans-oceanic shipping containers. It celebrated the Volvo Ocean Race 2008-2009, a dangerous round-the-world sailing competition between eight boats. One of them, Il Mostro, was sponsored by Puma itself, Boston's home-town team. The Volvo is understood to be the “Everest of Ocean Sailing” and the competing racers sail through April from Rio DeJaniero to Boston - their only US port - on the sixth leg of this global voyage. Designed by New York architects LOT/EK with help from Puma industrial designers, Puma City was in place only for a month, but in that month it proved a potent advertisement for a new way of making architecture. 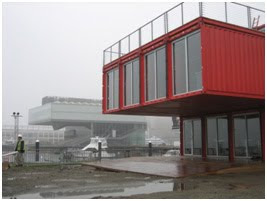 LOT/EK (low tech) architecture principals Ada Tolla and Giuseppe Lignano, both originally from Naples, Italy, are pioneers in the use of shipping containers, in thinking about architecture the way Marvin Minsky has suggested. They have previously designed containers for housing, for museums, for train stations and they have just completed a gigantic shopping center, Sanlitun South, near Beijing, China, comprised of 151 containers. This is going beyond “building” as we know it, in favor of virtual construction. And stacking pre-made shipping containers is virtual construction.

The firm’s name, LOT/EK has a parallel in William Gibson's short story, Johnny Mnemonic. In another story, Gibson coined the term, "cyberspace." Here, it's the Lo Teks, an urban tribe living in the ruins of the San Francisco-Oakland Bay Bridge. Johnny visits them. As he is led “up into refuge in their future-primitive aerie of re-purposed industrial detritus, the copious graffiti on the weathered domes below gradually fades until only a single name appears: LO TEK, in dripping black capitals.”

Not architects Tolla and Lignano either, although probably no greater architectural contrast could exist than the one between the sailing boats of the Volvo Ocean Race, hugely expensive organisms designed for speed and direction and to work with the flow of natural forces – waves, winds, human bodies – and the shipping containers that make up Puma City: boxes, four-square, plain, static, stacked like building blocks to resist any natural forces they may accidently encounter. This has traditionally been the design difference, really, between path and goal; between the human impulse to being on the way, and what happens when we settle and identify with a certain place. The result of that departure and return, even if the result is stacks of blocks, becomes architecture. 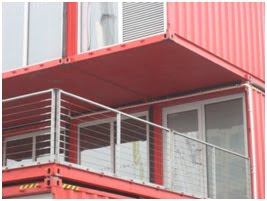 Stacking the blocks of Puma City appears to be as much fun as it was in childhood, only it's maybe even better, in part because of the immense size of shipping containers. Move two containers apart and you create an outdoor terrace. Pull a container back from the edge of the one below...it’s a balcony. Add bolts to the end of four containers together and you can produce a cantilever to rival the profile of the new ICA just across the water. And of course LOT/EK are real architects, so they do not just stack these things. Their goal is to create space. And with Puma City, they do, some of it elegant: terraces, balconies, double-height interior spaces in which people can socialize that are surprising to experience in a stack of blocks.

Of course LOT/EK designs with actual shipping containers, boxes that have really been shipped, so they need individual design attention: paint, insulation, windows, doors, electrical outlets. Each container received all that well before coming to the site of Puma City, so once on Fan Pier assembling the entire building takes just twenty union workers two weeks, using two cranes, a forklift, a scissor lift, 300 sheets of plywood, 3700 bolts, 15,000 screws... Quite a bit of work, really, but not as much as it took to assemble the building you are sitting in while you read this.

And here is the best thing: Puma City is re-usable. It was already assembled once prior to this, in Alicante, Spain, last October at the start of the Volvo Ocean Race. After Boston it will be shipped and used again. But once their usefulness as Puma City is done, the individual shipping containers finally can be recycled as...shipping containers! There are approximately 7 million shipping containers sitting idle as world shipping has ground to a halt here in the Great Recession. LOT/EK Architects’ tactile response to this condition is worth a visit.

A few telephone calls suggest that you could have your own shipping container delivered to your site for about $4500.00. How about it?

Jeff Stein is Dean of the Boston Architectural College