If you didn't happen to wander through the Federal Reserve Plaza this last week, you missed a sight that was worth seeing! Hours of design thinking and hard work were on display for the public to see and experience. Common Boston Common Build took place from June 17th - 20th and produced eight ambitious and insightful projects that took the first step in reaching out to the public through information packed way-finding installations.

Teams from all over the northeast, including a series of teams from Boston, competed to design and construct an innovative solution to Boston's lack of direction. Key players in the Fort Point Channel neighborhood were consulted and highlighted by the designs that were created over the 72 hour span. Four out of eight of the participating teams boasted Boston Architectural College students. Three of the four teams that won prizes in the competition included BAC students and the grand prize winning team was entirely made up of BAC students for the second year in a row! Grand prize and second prize designs will be displayed in Build Boston's Design Awards Gallery. 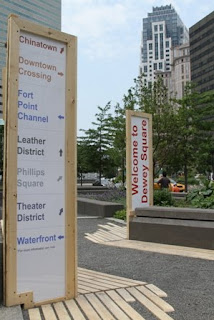 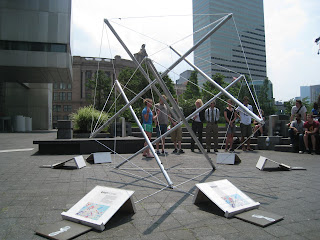 SECOND PRIZE: Tensegrity by Team Awesome Designs, which included BAC Students Oscar Anderson, Joshua Kirby, and Dan Lear. Their installation was a modern take on a tensegrity structure that lit up using LEDs to point out landmarks in Fort Point Channel.

Common Boston happens every summer and the Common Boston Common Build will be back as one of its key components again next year, so keep your hammers close. Congrats to all BAC participants for a job well done!
Competitions/Contests Events