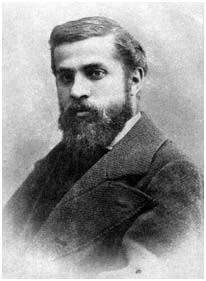 Antoni Gaudí was a Catalan Spanish architect who worked during the Modernist style period but became famous for his unique and highly individualistic designs regarded as beyond the scope of Modernism.During his youth, Gaudí suffered many times from the rheumatic fevers that were common at the time. This illness caused him to spend much time in isolation, and it also allowed him to spend lots of time alone with nature. It was this exposure to nature at an early age which is thought to have inspired him to incorporate natural shapes and themes into his later work.
Gaudí’s first works were designed in the style of gothic architecture and traditional Catalan architectural modes, but he soon developed his own distinct sculptural style. Gaudí spent ten years working on studies for the design of La Sagrada Família and developing a new method of structural calculation based on a model built with cords and small sacks of lead shot. The outline of the church was traced on a wooden board (1:10 scale), which was then placed on the ceiling of a small house next to the work site. Cords were hung from the points where columns were to be placed. The sacks of pellets, weighing one ten-thousandth part of the weight the arches would to support, were hung from each catenaric arch formed by the cords. Photographs were then taken of the resulting model from various angles. When the photographs were turned upside-down, the lines of tension formed by the cords and weights revealed the lines of pressure of the compressed structure. This is one of the ways that Gaudí obtained natural forms in his work.
On June 7, 1926 Gaudí was hit by a tram. Because of his ragged attire and empty pockets, many cab drivers refused to pick him up for fear that he would be unable to pay the fare. He was eventually taken to a paupers' hospital in Barcelona. Nobody recognized the injured artist until his friends found him the next day. When they tried to move him into a nicer hospital, Gaudí refused, reportedly saying "I belong here among the poor." He died on June 10, 1926.