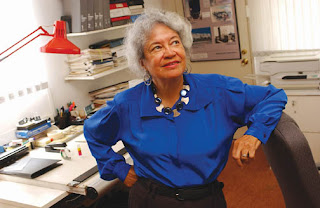 Norma Merrick Sklarek attended Hunter High, an all-girls magnate school, Barnard College and acquired her architecture degree in 1950 from, Columbia University School of Architecture. After receiving her degree, was unable to find work at an architecture firm. Sklarek took a job at the New York Department of Public Works and later spent four years at Skidmore, Owings & Merrill. In 1966 she became Gruen and Associates’ first female architecture director then became a Vice President at Welton Becket Associates.

In the 1980s, Sklarek became the first African American woman to form her own architectural firm, Siegel-Sklarek-Diamond in Los Angeles, which was the largest woman-owned and mostly woman-staffed architectural firm in the United States. However, the firm was short lived since it was tough for women to get the projects, and clients that are used to working with men. ''Women have a rough time in architecture and you have to be willing to stick with it,' Sklarek said, “In architecture, I had absolutely no role model. I’m happy today to be a role model for others that follow."

Sklarek’s major and notable jobs are City Hall in San Bernardino in California, Fox Plaza in San Francisco, Terminal One at the Los Angeles International Airport and the U.S. Embassy in Tokyo.