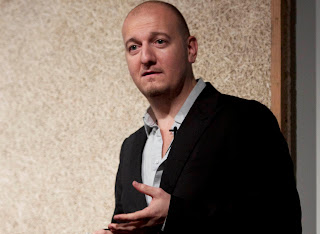 Stefan Boublil has done a number of things in his lifetime, from architecture to films, and has also studied many different things, from philosophy and theology to photography and filmmaking. With all of his experience in so many different things, it is safe to say he can understand how people may live their lives and what influences them to do certain things.

Boublil began his lecture in a way I would have never expected, especially being at a design school. He started by saying design related words that as a student here, I hear quite often; right after the list of words he warned us that he was not going to use any of these words, not even once. Immediately he caught my attention and I knew this would be a lecture like no other that I have ever attended. He explained that those words weren’t his words, they’re borrowed words and he didn’t necessarily relate to them.

Stefan Boublil briefly told us about his journey to where he is now. Originally from France and moved to New York City which is where he studied film and photography. While in New York City, he started the idea of “the  Apartment”.  This apartment was a real apartment that became an exhibition that was constantly changing its design. He realized that while doing this exhibition he was constantly making decisions and wondering how someone might live. Through this project he learned that one must study people, he calls himself a “social detective” and because of this, he realizes that he must consider everything while designing spaces.

I think the apartment is a very interesting and also slightly realistic idea. I feel that people sometimes want to change how their apartment looks and maybe the main reason why they don’t is because of the work that goes into re-designing a space. They also may not have the time to do it.

Boublil makes it his job every so often to re-design someone’s apartment in a completely different way but also leaves something behind of the old design. I think that adds a nice touch, a little reminder of how the apartment once was and how it is evolving as time goes by. It also indicates how people change.

People change their minds all the time, in that way, their style may change as well. Studying Interior Design, it makes me think about how I might design a space. I never thought about changing a design within time, once it’s already done, and now it seems so obvious.