Notable Films to Watch on Break :: The Third Man 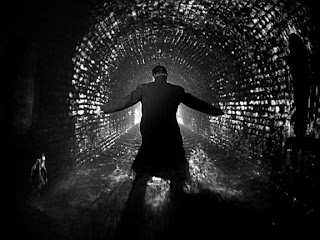 Notable Films to Watch on Break :: The Third Man (1949)
by Becky Anderson, Coordinator of Student Activities

This noir thriller from 1949 has tons of moody, deep shots of interiors, and odd-angled shots of streets and building facades to create tension and the feeling of chaos in postwar Vienna.

The tunnels featured in this film are part of the Wienkanal, which channels the Wien River through central Vienna out to the Danube River. The main tunnel is the huge arched structure through which the river flows a distance of about 1.6 km. The gated side passages are connections to a wet weather sewer overflow, and the chamber with the balconies is the overflow point. The spiral staircase is one of 6 exits from the main culvert.

The Vienna Police Deptartment has a special unit that is assigned solely to patrol the city's intricate sewer system, as its network of interlocking tunnels make great hiding places for criminals on the run from the law, stolen property, drugs, etc. The actors playing police officers in the film were actually off-duty members of that unit.