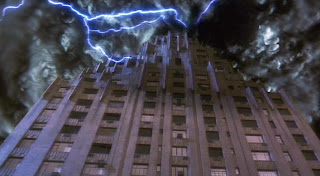 Any NYC architecture nerd knows that this movie is full of gems that can still be found in the city today - and some filming locations that you might think are in NYC, are really in LA.

Fun architectural places to note in the film:

The New York Public Library
Between 40th and 42nd Streets, New York, NY
Los Angeles Central Library, 630 W. 5th Street, Los Angeles, CA
Situated on 5th Ave, NYC, this is where it all begins. The huge stone lions still stand proud at the front & upon entering if you climb to the top of the stair case you will find the rose room.

However, when they film the scenes in the NYPL basement, this was actually the Los Angeles Central Library. One of the famous tricks of Hollywood--Film in 1 location, open a door and presto! New filming location.

Bank of New York
1 Wall Street, New York, NY
Ray, under the wise guidance of Peter, takes out 3 mortgages to help fund the purchase of the old fire station. Originally the Irving Trust Company Building, then the Bank of New York Building (after 1988), and after 2007 the BNY Mellon Building, is a bank headquarters building which remains one of the finest Art-Deco-style skyscrapers in downtown Manhattan.

Architect Ralph Walker conceived his zig-zag Art Deco skyscraper for the Irving Trust Company as a "curtain wall", not the typical sheet of glass hanging from a steel cage, but a limestone wall rippling like a curtain descending on a Broadway stage. Because of the curves in the wall, the bank does not completely occupy its full building lot, and by law the unoccupied and unmarked land reverts to the public, but for a number of small markers embedded in the sidewalk asserting the limits of the building's lot. Construction on the building began in 1929 and was completed in 1931, to the designs of the architectural firm of Voorhees, Gmelin and Walker.

Fire Station #23 in LA was used for filming internal firestation scenes. This building was built in 1910 as an operating fire station but spawned a political firestorm upon opening due to the ornate interior and expensive imported materials, such as Peruvian mahogany, in the chief's living quarters. The building was an unusually narrow structure, only 26 feet wide but 167 feet deep. Fire Station No. 23 was closed in November 1960 as the Los Angeles Fire Department began replacing older stations with newer stations with modern facilities.

Temple of Zuul/Dana Barrett's Apartment Building
55 Central Park West, New York, NY
Exterior shots of 55 Central Park West were used in the film. A duplicate of the building's rooftop and the first 3 floors were constructed in Los Angeles to film other scenes. This 109-unit coop apartment building was designed by Schwartz & Gross and completed in 1930.

All of the setbacks have protruding vertical design elements that are also placed around the building above the ground floor. These elements rise towards the center of the park-facing facade from one-story to three stories in height, mirroring the top of the building, which has its centrally placed water tank in a decorative tower.

Tavern on the Green
Central Park West and West 67th Street, New York, NY
Several different views of the tavern are seen, some exterior shots, and some interior shots focused on the large windows. The building is featured heavily in the scene where Louis Tully is being chased by one of the terror dogs. Louis runs up to the tavern, but is unable to get inside. He is then seen pounding on one of the large windows of the Tavern before being attacked by the dog.

Originally built in 1870 as a place to house the sheep who grazed in Central Park's Sheep Meadow, It was converted into a restaurant in 1934, and was in operation until December 31, 2009 when it closed its doors.

Columbia University
Broadway Between 116th and 120th Street, New York, NY
After getting thrown out of University, Ray and Peter sit on the steps of the University Library discussing their future. The Columbia campus was designed along Beaux-Arts principles by architects McKim, Mead, and White.

Lincoln Center
140 W. 65th St, Upper West Side, New York, NY
Venkman first tells Dana about Zuul here and asks her out on a date. This fountain was unveiled on April 6, 1964. The architect is Philip Johnson of Philip Johnson Associates.

Rockefeller Center
Between 48th and 51st streets, New York, NY
Principal builder, and "managing agent", for the massive project was John R. Todd and principal architect was Raymond Hood, working with and leading three architectural firms, on a team that included a young Wallace Harrison, later to become the family's principal architect and adviser to Nelson Rockefeller.

Brooklyn Bridge
The Brooklyn Bridge is one of the oldest suspension bridges in the United States. Completed in 1883, it connects the New York City boroughs of Manhattan and Brooklyn by spanning the East River.

The Brooklyn Bridge was initially designed by German immigrant John Augustus Roebling. While conducting surveys for the bridge project, Roebling sustained a crush injury to his foot when a ferry pinned it against a piling. After amputation of his crushed toes, he developed a tetanus infection which left him incapacitated and soon resulted in his death, not long after he had placed his 32-year-old son Washington Roebling in charge of the project.

Washington Roebling also suffered a paralyzing injury as a result of decompression sickness shortly after the beginning of construction on January 3, 1870. After Roebling's debilitating condition left him unable to physically supervise the construction firsthand, his wife Emily Warren Roebling stepped in and provided the critical written link between her husband and the engineers on site. The Brooklyn Bridge was completed thirteen years later and was opened for use on May 24, 1883.