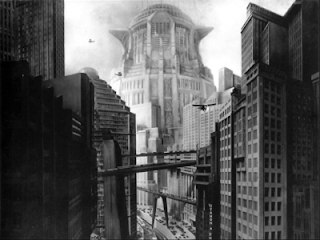 For its time, Metropolis was revolutionary in terms of special effects and set design. A running theme throughout the visual parts of the film is German Expressionism, while the architecture in the film is based on Art Deco and Modernist designs.

Things to note in the film:

Depending on what version of the film you watch, the restored version includes a straight-down view of the Tower of Babel that was not in the original.

Rotwang's Art Deco laboratory is a forerunner of the Streamline Moderne style and was highly influential in the set design of films in what would soon be known as the Raygun Gothic style. Try to watch these scenes and not think of every other mad scientist's laboratory in films and tv shows that have followed this film.

Eugen Schüfftan worked on the effects in this film and used the Schüfftan process - the process of using mirrors to "place" actors inside of miniature sets which are now filmed.

Notice the cars that drive the high, angled overpasses during the scenes with the Tower of Babel - they look like cars of the 1920s. The prop designers decided to not modernize their design for the film.

A chance discovery of a sample of "plastic wood" (a pliable substance designed as wood-filler) allowed costumers to sculpt the Maschinenmensch costume like a suit of armour over a plaster cast of the actress. Spraypainted a mix of silver and bronze, it helped create some of the most memorable moments on film.