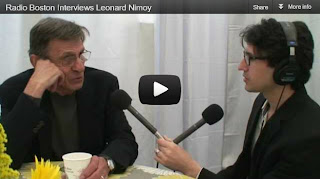 Radio Boston WBUR interviewed Leonard Nimoy, most known for his role as Spock on the original Star Trek television series from 1966-1969. Nimoy was born in Boston and lived in the West End during his childhood.

The West End is the area between Beacon Hill and North Station. Currently the West End is dominated by large hospital buildings, residential towers, and parking lots, but previous to the Boston Redevelopment Authority's urban renewal of the neighborhood in the 50s, the West End was a tight urban neighborhood.

In the above video, Nimoy states: "I wish I could go back to my roots. I can’t. They’re gone. The buildings are all torn down. I try walking with my wife to show her where I lived, but it’s so difficult because the street configuration has changed so much that I feel it’s gone. I feel my roots are gone." He also goes on to talk about how the West End's urban renewal project affected his family.