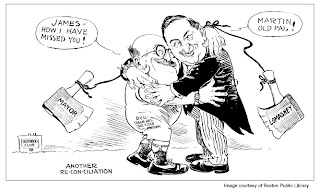 Ward Boss Lomasney, a new show at the West End Museum, commemorates the legendary status of Martin Lomasney, the undisputed boss of Boston’s Ward 8 (later Ward 5, then Ward 3 under re-districting) from about 1885 until his death in 1933. Reproductions of W. Norman Ritchie’s political cartoons from the Boston Post and others from the Boston Globe will be on display together with graphic panels featuring related articles and Lomasney’s most renowned quotes, including “Don't write when you can talk. Don't talk when you can nod your head.”

The show runs from May 15 through August 4 in the Members Gallery and is curated by West End Museum Executive Director Duane Lucia. The exhibit reception takes place on June 16 at 6 p.m. and is free and open to the public. Guests will enjoy light refreshments, including the “Ward Eight”—a cocktail created in 1898 at Locke-Ober in honor of Lomasney’s election to the state legislature and the district largely responsible for his victory.

“Martin Lomasney is without a doubt one of the central figures in West End lore,” says Lucia. “His influence on the community, both socially and politically, cannot be overstated. To this day, the street named after him (Lomasney Way) is a testament to the legendary status he holds with many current and former residents of the area, and we felt the Museum should honor that.”