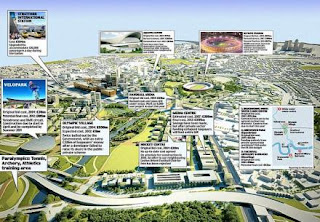 The master plan of London's 2012 Olympic Park was designed by AECOM. The winning plan called for the creation of one of the largest new European parks in a century, as well as environmental remediation and restoration - allowing for a new urban area to flourish during the games, as well as afterward.

Olympic stadiums are typically built to hold over 80,000 people during Olympic events, however once they're all over - countries have had to ask the question, "What do we do with this now?"  Some stadiums are tourist attractions like the Montreal Olympic Stadium, which houses a soaring elevator tower. The Beijing Stadium, also known as the Birds Nest, sits empty for most months, and plans of what to do with it are still unknown. It is not just the function of the building that is the trouble, but the amount of maintenance and upkeep is more than most cities and developers want to think about. The 2012 London Olympics set out to change all that - the plan is the most sustainable pavilion complex in the history of the Olympic games. 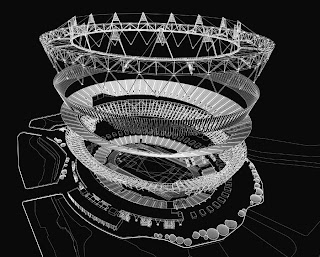 The London Olympic Stadium may not look like a mega birds nest, but it is one of the most innovative stadium designs ever. Designed by Populous, the stadium can be taken apart and made smaller after the games are over. There are two major tiers to the design. The lower tier allows for 25,000 seats, the second holds 55,000 seats. The roof is a cable roof system, allowing for an extremely light weight building, as well as easy construction.  After the games, the design allows for the deconstruction of the second tier and the ability to lower the roof system. This allows for the stadium to be much more functional for the rest of its lifespan. 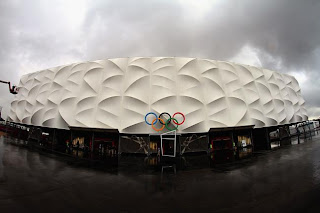 The Olympic Basketball Arena, designed by SKM +Wilkinson Eyre Architects with KSS, was designed to be deconstructed and recycled after the games are over. The arena, which is one of the largest temporary spaces ever built for an Olympic Games, is seven stories tall, and is wrapped in 20,000 square meters of lightweight and recyclable PVC material. The panel design allows for easy dismantling and future reuse elsewhere in the world. 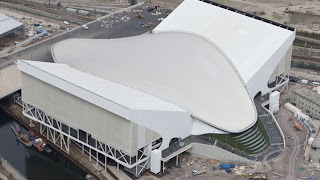 Standing out with its waved-shaped roof, the second-largest 2012 Olympics building is the Aquatics Centre, designed by Zaha Hadid Architects. The stunning ceilings which soar over the two 50-meter pools are built out of a sustainable timber. Much like the Basketball area, the exterior of the Aquatics Centre is constructed with precast modular blocks of concrete, eliminating the need for exterior painting as well as reducing the amount of emissions required to build the facility. The bleachers are also made of a material that will be recycled after the games are over.


For more information on these buildings, as well as other designs in the 2012 London Olympic Park, visit the blog e-architect and don't forget to tune in beginning tonight with the Opening Ceremony.