Have you been to downtown Boston? Chances are, you've walked through the Rose Kennedy Greenway. A brand new landmark of the Boston area, the Greenway was officially opened in Autumn of 2008. The series of parks was designed to renovate the 'scar' left after the Big Dig. It is a stretch of green space spanning 1.5 miles that runs from North Station to Chinatown.

Along the Greenway there are five major parks along which one can stop and catch their breath; the North End, Wharf District, Fort Point Channel, Dewey Square, and Chinatown parks.

The one I tend to frequent most often is the North End park. It offers one of the most beautiful views of downtown Boston that I have come across. In the middle of the afternoon, you can sit at a table, or on the grass and people watch for hours. Bostonites and tourists alike use the space for their lunch break, sunbathing, frisbee, and leisure. It's a perfect place to stop and sketch while soaking up the last bit of summer weather. 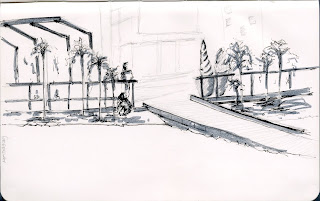 Make sure you keep an eye on the Greenway's events calendar and check out how to get involved too!
﻿
Field Trips