Just a few blocks from school sits the first large free municipal library in the United States - The Boston Public Library (BPL). Most of you have probably been to the library while you were a new student at orientation. If you haven't been, then as soon as you read this article - get up and go check it out - seriously - read this and go!

There are two very obvious portions of the BPL, the original portion completed in 1895 designed by Charles Follen McKim and the addition which was built in 1972 and designed by Philip Johnson.

From the outside it is clear the buildings were not built at the same time. The main distinction is the choice of material, but also the style of the buildings. Though both have elements that are similar in scale, the elements themselves show a change of architectural period. 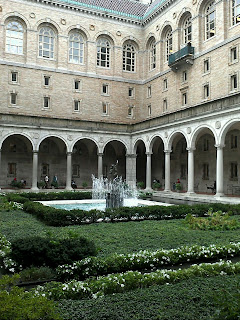 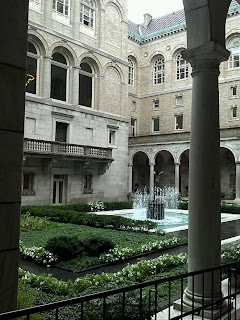 The connection between the two buildings is one of the most elegant spaces to visit in the city of Boston. Even on a gloomy day, you can still sit in the central courtyard and enjoy a simple cup of coffee, read an assignment for class, chat with some friends, listen to the fountain, and of course - go on Instagram and show off where you are.

There are main design elements within the two portions of the library that are similar, but executed in very different styles. The entry staircase designed by Philip Johnson is similar in design but does not include the ornate details that the entry staircase of the original library.

To compare the two spaces go and check it out. Oh and go up the stairs in the original building to look for the Reading Room too. The Boston Public Library is located at 700 Boylston Street, Boston, MA.