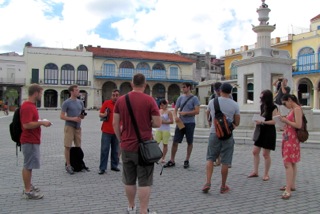 Saturday Evening, 09/22/2012
Sunday’s study topic, La Habana Vieja, had begun on the previous two nights while we looked around for good places to eat. We did well with the Meson de Flota on Friday, but our pick for Saturday, Rancho Luna, was off the mark.  We erased that bad experience with an after-dinner walk along the Avenida del Puerto up to the mouth of the harbor, where we caught sight of the red channel marker to which Victor Alvarez, the musician in the documentary we watched before the trip (One Among Thousands), tried to swim like he used to do when he was growing up. 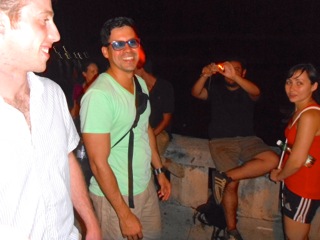 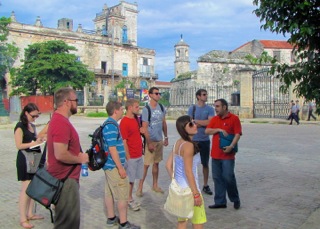 Sunday Morning, 09/23/2012
The first stop of the day, La Plaza de Armas, is a short walk from our hotel.  Norberto, our guide, gave us a summary of the history and features of this, the first plaza in La Habana.  We’d asked Norberto to give a brief explanation of each plaza so the Longstudieros would have ample time to study them using the day’s principal means of investigation, sketching. Each student was required to do a 20 minute sketch at each of the five plazas before the lunch break. After lunch, individuals would do two detailed sketches at a place of their choice. 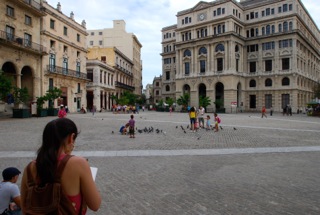 Each Longstudiero picked a different part of La Plaza Vieja for their initial sketch, such as the 19th century Neoclassical ‘Templete,’ which commemorates the origins of the city; the statue of Cuba’s first president, Cespedes; and the Hotel Santa Isabel, which originated as the Palacio deConde de Santovenia.

Norberto introduced each plaza in roughly the sequence in which it had been created. Our next stop was the Plaza de San Francisco. Originally, one side of this plaza was the harbor quayside where commercial ships docked. That focus remains today with the early 20th century Custom House built during the American occupation (now a cruise ship terminal) as well as the old stock exchange building (now rented to foreign businesses).

The side opposite the Stock Exchange Building is occupied by the former convent of San Francisco, now a concert hall, museum, and conference center. The studio took a liking to the statue of the ‘Caballero de Paris,’ a homeless man who was a fixture of La Habana Vieja for much of recent history. It’s just outside the entrance to the now converted sanctuary. 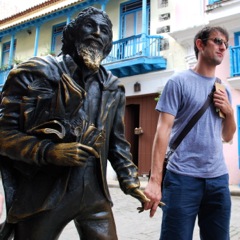 John and Luis explained to the Longstudieros that less than two decades ago, the plaza was filled completely with a two-level parking garage and the buildings surrounding it were in ruins. Now the plaza is graced with a fountain, and its restored buildings house a grade school, apartments, an art museum, and a photography center for Cubans as well as ground floor restaurants, a coffee shop, and a brew pub for tourists. 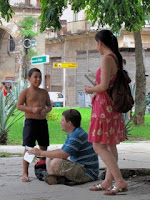 From La Plaza de Cristo, Norberto took us through a set of ladder streets to the La Plaza de La Catedral, the ‘newest’ plaza. He explained that when this plaza, built on a wetland, was finished, the merchant’s plaza,‘La Plaza Nueva,’ was renamed ‘La Plaza Vieja.’  He also noted that the Cathedral on the Plaza experienced significant changes. A new Archbishop couldn’t abide its Baroque style so he transformed the interior into a neoclassical one.  Baroque facade, neoclassical interior. Cases for syncretism. 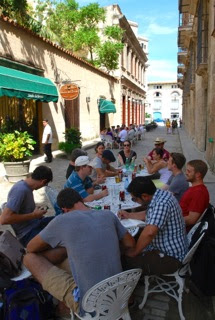