A new exhibit titled, City of Mirages: Baghdad, 1952-1982, recently opened at the Boston Society of Architects Space, which describes a time when the city of Baghdad was a thriving, cosmopolitan city with numerous large scale projects in the works. The exhibit explores both the built and unbuilt work of 11 architects, including Frank Lloyd Wright, Le Corbusier, The Architects Collaborative, Alvar Alto and others. It's amazing to see what the city almost was and could have been - so much different than what we all know of it today. 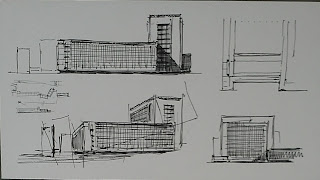 The exhibit showcases the designs of many well known designers from conceptual sketches to finished renderings, with large scale models to accompany each project. Go and check out the drawings, it's always inspiring to see what was done before the age of computers took over. The models on display are also really great to see, it allows you to appreciate the art and skill that goes into building them, but it also shows how you could use new materials, and new skills to make your own models better.

Visit the gallery because the exhibit does a good job of collectively showing a time in history that often goes unspoken due to more recent events in the country's history. All the drawings are simple and get the idea of the design across without giving you a headache.

City of Mirages: Baghdad 1952-1982 will be on display through mid-January 2013. The BSA Space is located at 290 Congress Street, admission is free and open to the public.