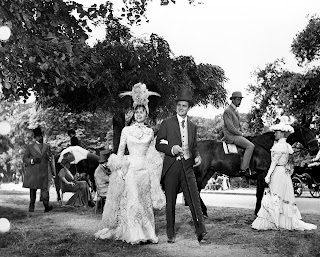 What better way to welcome Valentine's Day  than to fall in love with Parisian design during a free film screening?

Gigi (MGM, 1958), winner of nine Academy Awards, including Best Picture and Best Director, stars Leslie Caron as a precocious Parisian girl groomed to be a kept woman, who comes to realize she'd rather marry for love instead.

Considered to be the last great MGM musical, this luxurious production crowned the career of acclaimed director Vincente Minnelli. Gigi will be introduced by Mark Griffin, author of A Hundred or More Hidden Things: The Life and Films of Vincente Minnelli.

Before the main feature, Griffin will screen a compilation of clips from some of Minnelli's other movies including Meet Me In St. Louis, An American in Paris and The Band Wagon.

The film Gigi was highly criticized for focusing too much on its fabulous Parisian locations and costumes. Want to learn more about the fabulous spaces and places in the film before attending the screening? Click here.