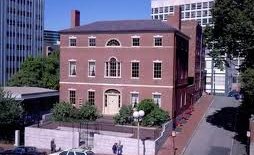 The Otis House - photo from historicnewengland.org

In the period following the Revolutionary War, the definitive type of architecture in the United States was the Federal Style. Like the country's new government, this style of design was heavily influenced by the Roman Republic and consciously strove to express its ideals.

Federal Style homes were often designed as a symmetrical two- or three-story box atop a raised foundation. Ellipses appeared frequently, whether as a fanlight above an entry or as an interior decorative panel. The Otis House, designed by Charles Bulfinch and built in 1796 on Cambridge Street in Bowdoin Square, incorporates all of these elements as well as several more that are common in the larger scale Federal High Style. 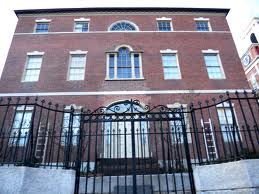 The Otis House is three stories on the typical raised foundation of the Federal Style. There are five symmetrical columns of windows with keystone lintels. The central column includes the entry, which is surrounded by sidelights and an elliptical fanlight, and a prominent second story Palladian window. The low-hipped roof is accompanied by cornices with refined dentils on the front facade and decorative moldings on the sides and rear of the home.

The interior of the house also has very strong symmetry, especially in the placement of windows, fireplaces, and decorations such as paintings and mirrors. Even the doors were arranged symmetrically, to the point that several false doors were installed to balance the functional ones. 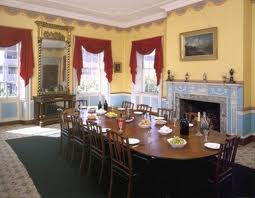 The decorative elements throughout the house are also excellent examples of the Federal Style. Every room is adorned with plaster cast moldings along the tops of the walls as well as decorative plaster cast panels. The various wallpapers and carpets have geometric patterns, ellipses, and swag patterns. Swags are also prominently employed in the drapery, and garlands are carved into the mirror frames and some of the furniture. 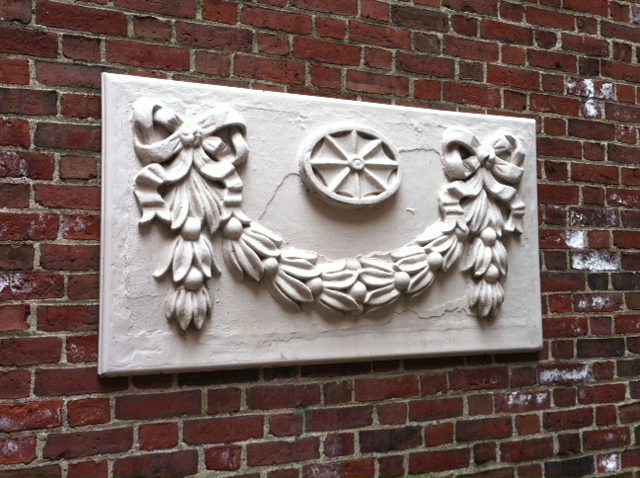 The numerous examples of Federal Style design details in the Otis House make it one of the best examples of this type of architecture. This is arguably because designer Charles Bulfinch is considered one of the most important architects of the time due to his work on a number of Federal Style public buildings in Boston including the Massachusetts State House.

The Otis House is located at 141 Cambridge Street in Boston, and tours are available every half hour from 11:00 am - 5:00 pm, Wednesday through Sunday. Tickets are only four bucks for students, so if you want to check it out be sure to take your student id. I would strongly recommend that, if possible, you go during the middle of the day during the week so that you have a better chance of being given a personal tour. I went at 12:30 on a Thursday, and since I was the only person the tour guide was kind enough to customize the tour for my interests.  Check it out if you have a chance; visiting the Otis House is a great way to learn about the history and architecture of the city we live in.