On Thursday, February 14, 2013 James Corner presented a lecture to a packed crowd at the Isabella Steward Gardner Museum.  He started the lecture by describing three axioms by which he designs. First, one must consider aesthetic; although he does not consider himself a designer of traditionally picturesque landscapes, there must be some consideration for scenes and aesthetic. Second, there must be a framework and planning; "if you aren't making the decision, you don't control it." Third, you must let it grow and adapt to what the environment can naturally become. From there, the main topic was his involvement and process in the design of the High Line Park, in New York City. Corner briefly discussed several other ongoing projects within the same thread, including the Seattle Waterfront and Qianhai, Shenzhen, China.

If you aren't familiar with the project, the High Line is a one and a half mile long stretch of park that sits on top of a once derelict elevated railway line. The project has been divided into three phases. The first two phases have been completed, and the third is under production. The first section covers a strip of railway that is quite wide; wide enough to offer a variety of lounging and progression spaces. Towards the end of the first section, near 10th Avenue Square, there is an amphitheatre with large glass windows open to a view of the streetfront. Corner talked about how this creates a freeze frame of a typical New York street scene, but what I like most is that it becomes an advertisement for the High Line as well, with a view that mimics the mannequins of storefronts beneath.

The second phase is considerably more narrow, and much is cast in shadow, damp, and cooler. Because of this, Corner decided to raise the walkway above the vegetation as a way to elevate pedestrians to the treetops. The threshold to this area is a deep thicket to transition from the open park feeling of section one to the more compact, dense section two. The third phase has recently been unveiled, and Corner had several graphics to share depicting the final product. Within that section, they were able to keep some of the original vegetation, designing a pathway around it, ending in a large open space with much flexibility for use.

Upon visiting the site for the first time, Corner and his team found a secret garden of overgrowth. He talked about the decision to keep the essence of their discovery, saying that "designers often mess things up." They wanted to keep it simple, wild, quiet, and clean. The path splinters along the way to reveal nature through the cracks. Corner's firm, Field Operations, developed open joints to capture the rainwater runoff for planting irrigation. Although the original intention was to build on top of the railway, the tracks had to be torn up because of lead paint and rust. Each was carefully numbered and identified in order to put it back in it's original position. There are over 500 types of plants used throughout the park, to create different seasonal experiences. All of the furniture is integrated into the pathways in an attempt to minimize interruption. 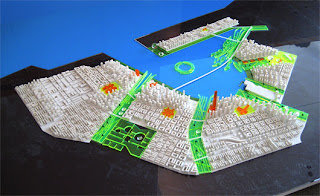 http://www.bustler.net/index.php/article/james_corner_field_operations_wins_urban_design_competition_in_qianhai_shen/﻿﻿﻿
﻿
Briefly, Corner discussed two of his current projects: the Seattle Waterfront, and the Waterfront in Shenzhen, China. Both will have park walkways that connect areas of the city. The strategy in Shenzhen is to divide the area by 'fingers' of parkland, with themes. Corner fought to adapt design within the large city blocks of the city. His reasoning is that "by controlling block size, you can say something about the quality of development." Smaller blocks promote better spaces for pedestrians, allow for nuances. Larger city blocks can inhabit this by focusing on major scale developments rather than looking at a street scale.

In Seattle, the mission became focusing on multiple scales and reconnecting these with one another and to the waterfront. There has been much research into how to redesign the sea wall, because of earthquakes. Corner and his group also explored many possibilities for the sectional profile of what the sea wall can be. One of these studies is the possibility of a series of ledges to support various levels of aquatic life, including glazing explorations to bring more light through a greater depth of water, which will bring more desired aquatic life to the area.

Corner closed his lecture with an image of a petri dish with several forming micro-colonies as a metahpor for his initial commentary. He restated three axioms; in design you must picture, organize, and then let it grow.