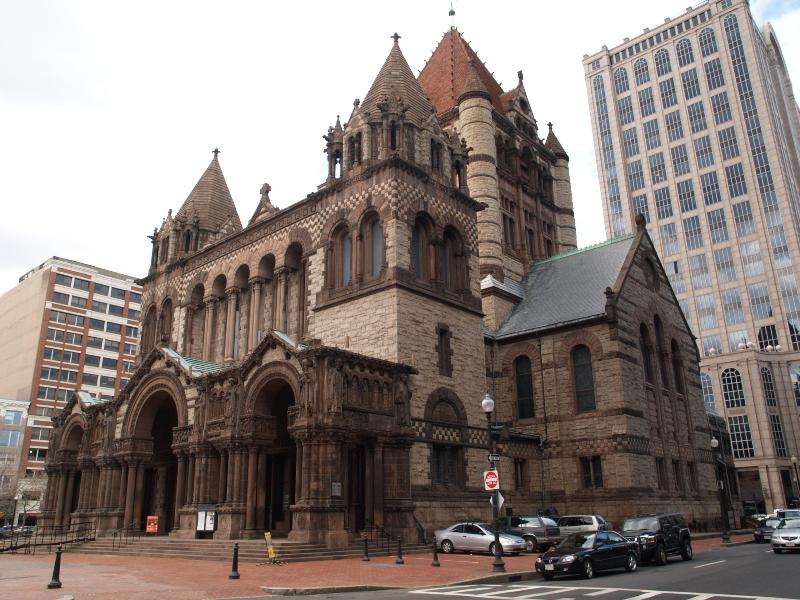 In the late nineteenth century, prior to the popularization of the Beaux Arts style, American architect Henry Hobson Richardson developed a new Romanesque revival style that was ultimately named after him. Richardsonian Romanesque was heavily influenced by the work that Richardson studied at the Ecole des Beaux Arts in Paris, primarily the revival of Roman design that pervaded southern European architecture in the eleventh and twelfth centuries.

The defining characteristics of this style include strong rounded arches, an asymmetrical rough faced stone facade under a clay tile roof, groupings of columns, and polychromy, which is the use of multiple colors in architectural details and interior decoration. 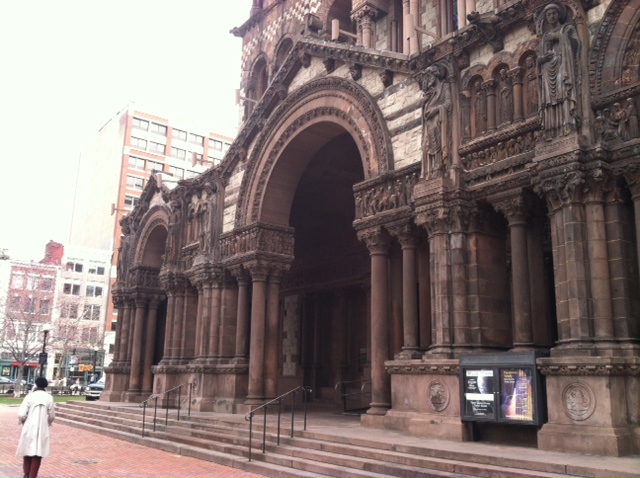 The arched entrance, incorporating many elements of the Richardsonian Romanesque style - photo by Ian Hester

A large squared central tower with a pyramid cap is often the dominant feature, which creates a fascinating contrast with the standard conically capped round towers that protrude from the facade. 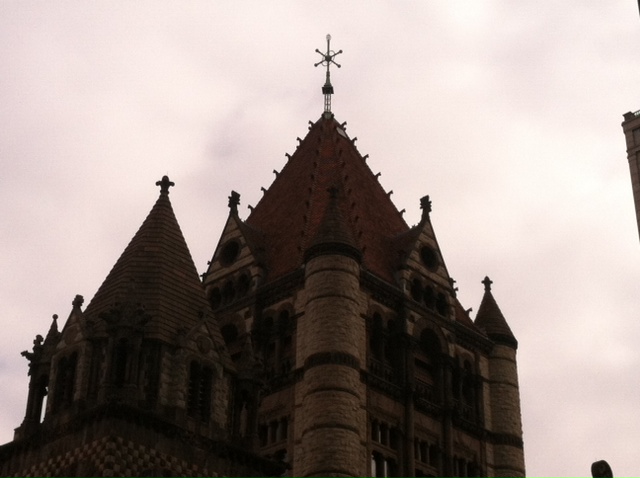 Richardsonian Romanesque was established when Richardson designed the widely lauded Trinity Church in Copley Square, which is still largely considered the best example of the style. Between 1877 and 1900 this type of design was employed throughout the United States, frequently for public buildings such as train stations, courthouses, schools, and churches. 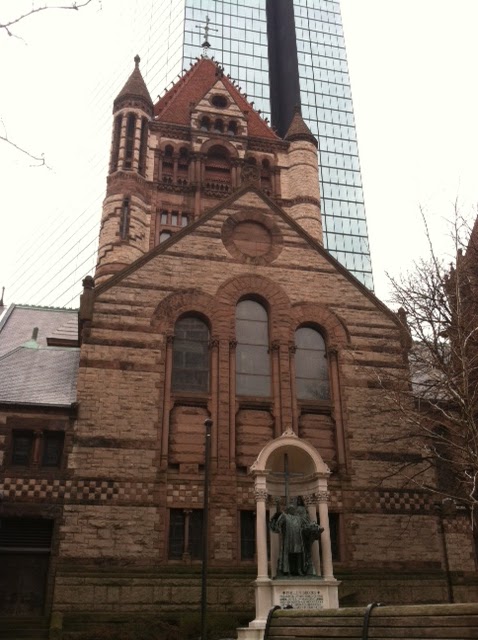 The layout of Trinity Church is a four-armed Greek cross with a 211 foot central tower between a nave, chancel, and transepts that are each equally sized. This created an open, inclusive plan that embodied the philosophy of the congregation's rector and parishioners and later became a standard element in American churches. 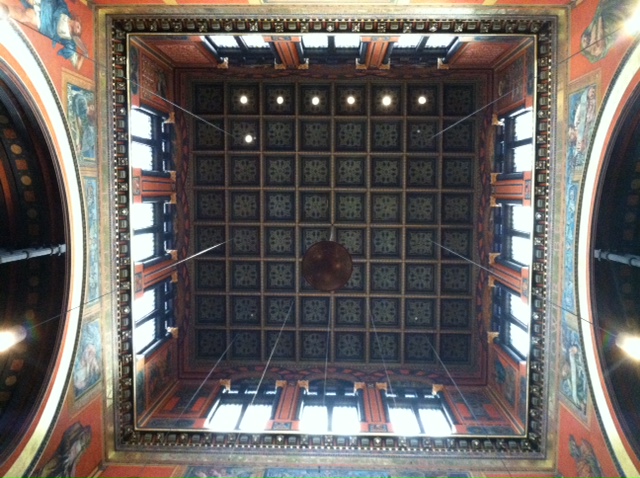 View of the central tower from below - photo by Ian Hester

The asymmetrical facades are composed of rough faced granite with brownstone trim, which served as the precedent for the exterior polychromy that was a defining element of the Richardsonian Romanesque style. The rounded arches and towers that contrast the otherwise linear geometry, especially in the squared central tower, also became signature elements of the style. 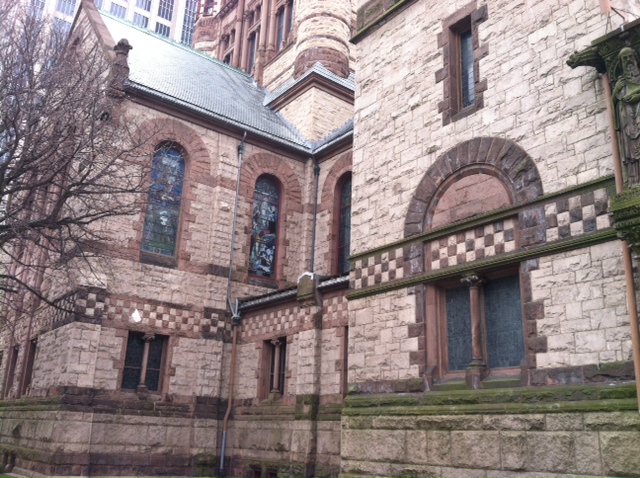 The combination of the heavy structure of the church and the site that was a tidal marsh only forty years before construction began required an element of engineering throughout the design process. About 4500 wooden piles were driven thirty feet down through the gravel, silt, and clay found throughout the Back Bay to support four large granite pyramids that allow the underground water level to rise and fall without compromising the foundation. The church was then built up from these granite pyramids which support the entire load of the building.

Trinity Church is only a few blocks away from the BAC, next to the John Hancock Tower in Copley Square. Free tours are provided at 11:15 on Sundays; they meet at the eagle lectern in front of the altar immediately after the service has concluded. Self guided tours, which are $5 for students, are available from 10:00 - 3:00 Monday through Friday, 9:00 - 4:00 on Saturday, and 1:00 - 5:00 on Sunday. Guided tours, which are $12, are given at noon on weekdays. For more information, click here. If you have some free time between classes, take the time to check out one of the AIA's top ten most significant American buildings.

I would like to note that the memorial for the Boston Marathon victims is in Copley Square, right in front of Trinity Church. For many of us this is a painful memory that needs more time to heal, and confronting the memorial may indeed be an emotional experience.  Since all of us have been dealing with this tragedy in different ways, I would like to encourage everyone who plans to visit Trinity Church this summer to be aware of the memorial in Copley Square. 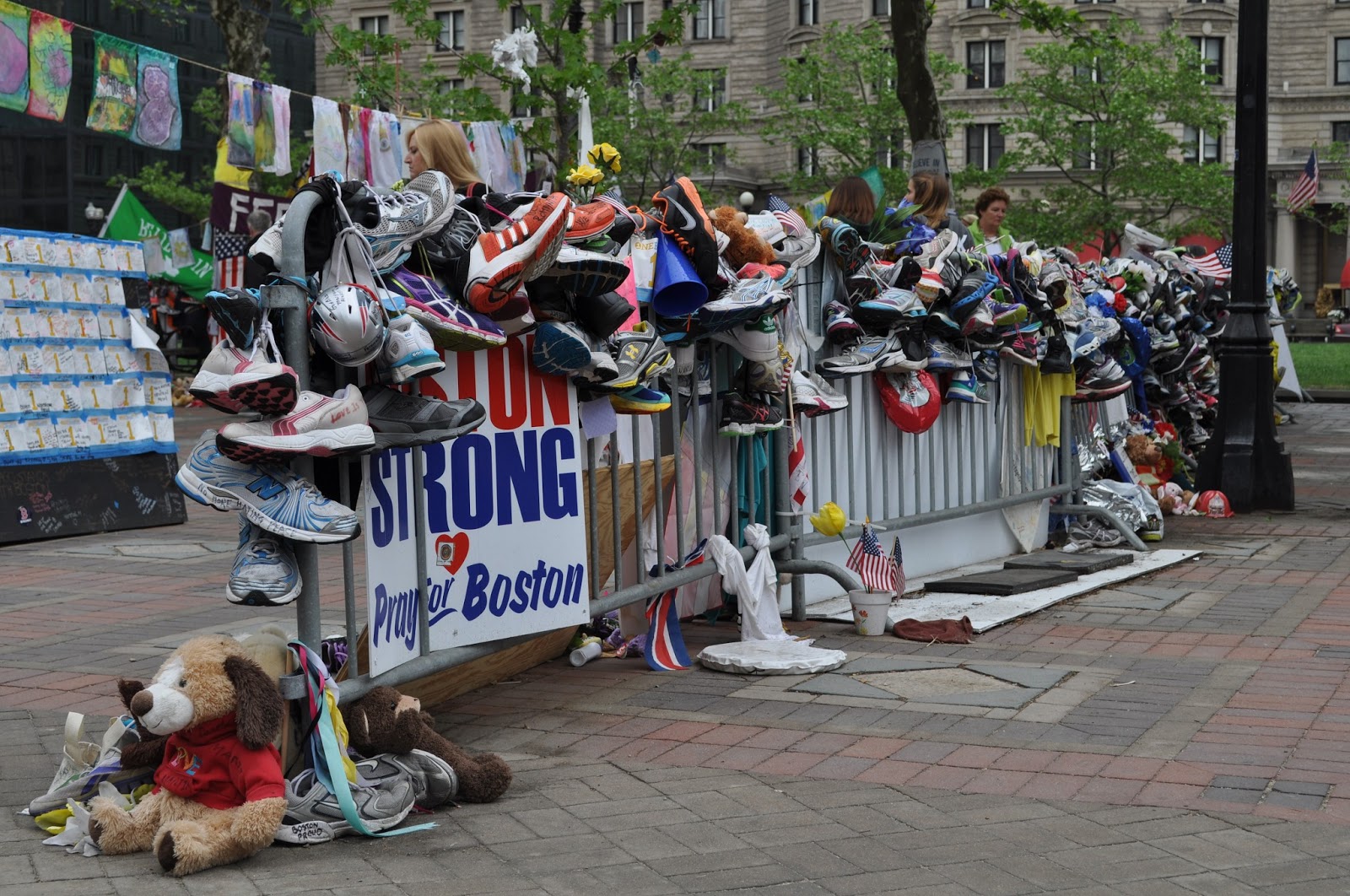