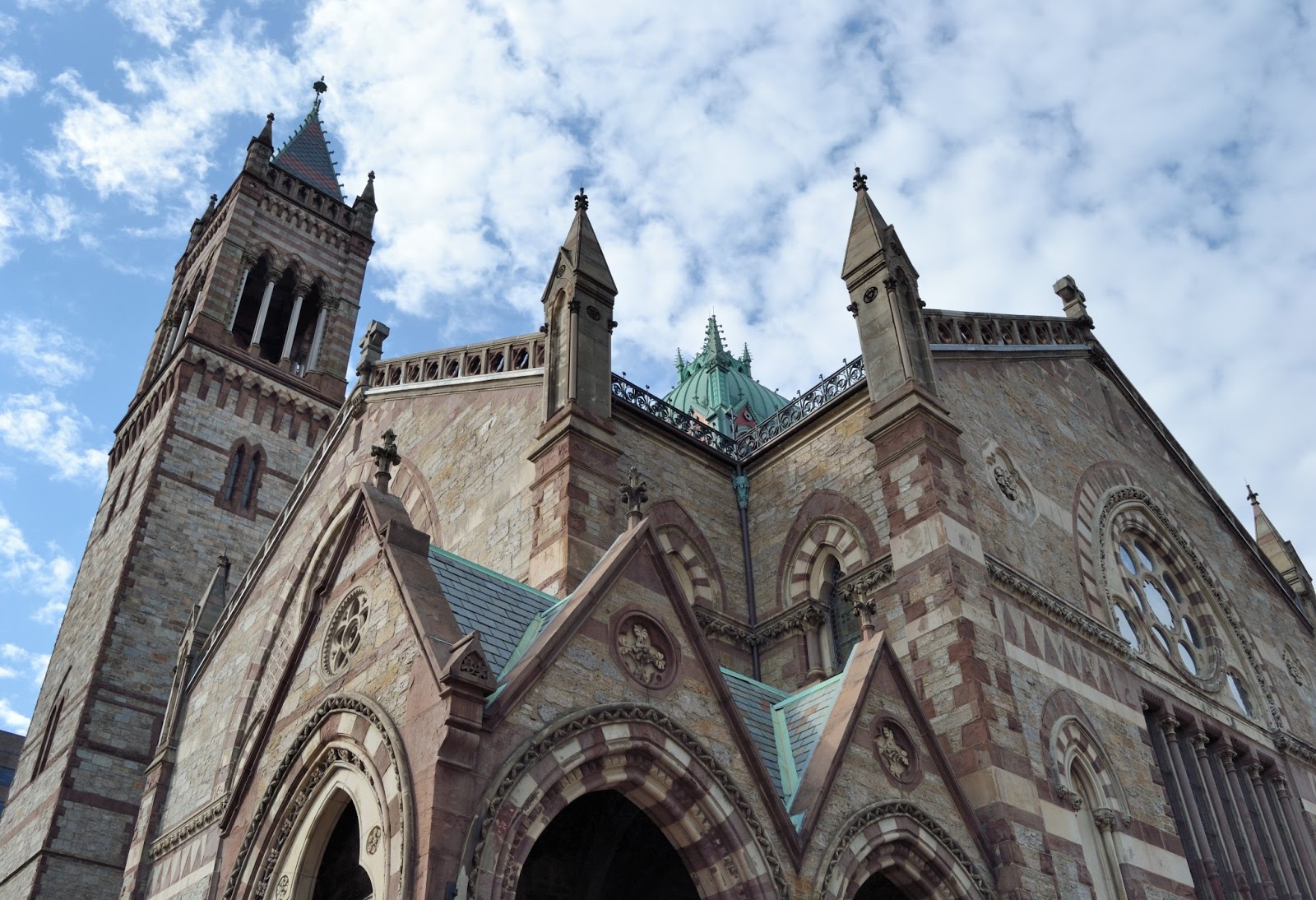 One of the most fascinating periods in the history of Boston was the 1870s, when the Civil War had recently ended, the Industrial Revolution was changing the world, and the Back Bay was being filled in to create a vibrant new neighborhood in the city. Boston was full of optimism, and this atmosphere was reflected in the design of the city's newest landmark, the new Old South Church. 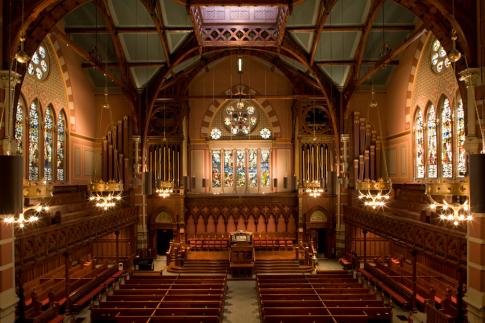 Interior from the rear balcony - Photo from oldsouth.org

In 1872, the congregation of the Old South Church commissioned Boston architects Charles Cummings and Willard Sears to design a new building on the northwest corner of Copley Square. The design employed a type of Gothic Revival architecture called Ruskinian Gothic, which had been popularized by art and architecture critic John Ruskin in the mid nineteenth century. 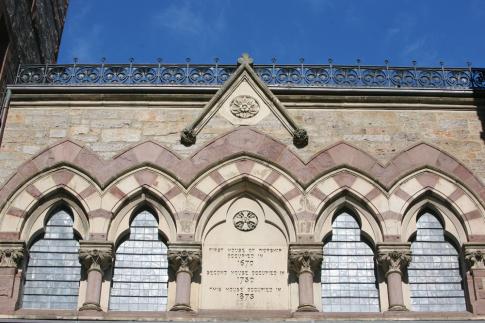 Gothic arches on the facade - Photo from oldsouth.org

The Ruskinian Gothic style is most notably characterized by extensive polychromy, the use of several different colors in building materials, and the creation of patterns with these colors.  This is clearly evident in the facades of the Old South Church, which consist of gray, red, and brown shades of Roxbury puddingstone. The wooden trusses, similar to those found in examples of Northern Italian Gothic architecture, are also a feature of the Ruskinian Gothic style. 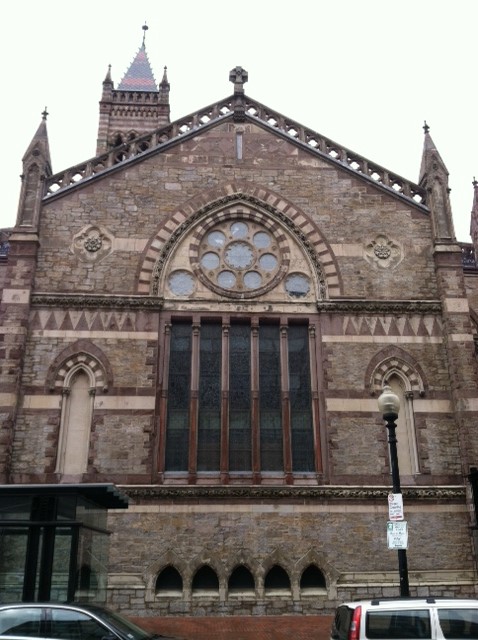 The influence of Venice upon the design of the Old South Church is found throughout the interior. The beautiful mosaics are reminiscent of those found in the Doge's Palace, and the copper cupola with its Gothic arched windows appears to have been strongly influenced by St. Mark's Basilica. 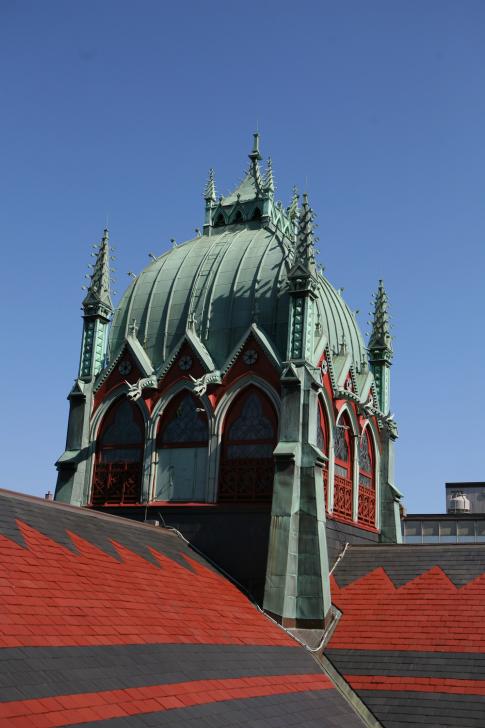 One of the most striking features of the interior is the detailing of both the stonework and woodwork. The ornate carving is impressive at a glance, but absolutely breathtaking upon closer inspection. There are seemingly endless variations of flowers, vines, and animals throughout the church, including a different flower on each pew. 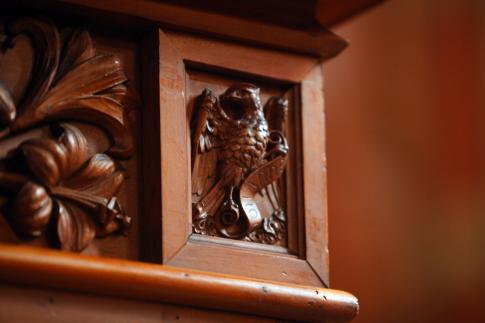 The church's most iconic feature is its campanile, or bell tower, which rises 246 feet and can be seen from a number of Boston's neighborhoods. The pyramid cap and distinctive high Moorish arches have made the Old South Church one of Boston's landmark sites. 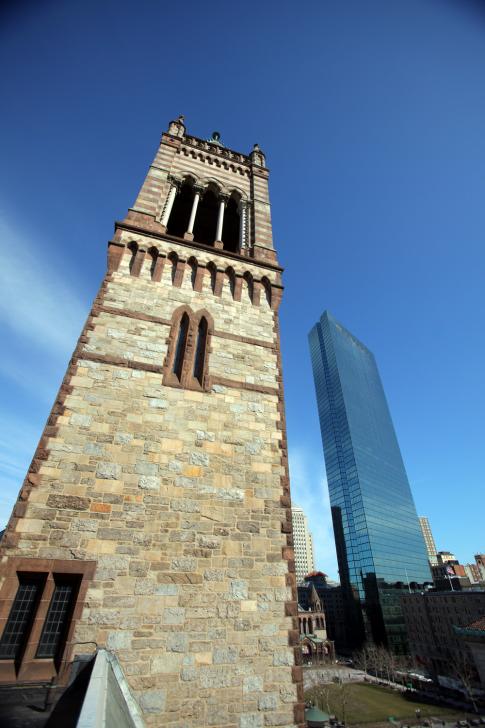 The Old South Church is unquestionably a building that is much better to experience in person than to read about. The detailing of the stone and wood is especially fascinating when it is right in front of you. Fortunately it is really close to the BAC, right on the corner of Boylston and Dartmouth, and visitors are encouraged to look around. It is open from 8:00-7:00 on weekdays, 10:00-4:00 on Saturdays, and 8:30-4:00 on Sundays.

Unfortunately there are not any regular tours, but if you have any interest at all in Gothic architecture and/or churches then you will certainly enjoy sketching there. If you need something to do this summer, or if you want to fill in some time between classes next semester, go check it out. If you end up not squeezing in a visit in the near future, it's ok. You'll get to savor the experience when you graduate, since the BAC celebrates Commencement there every year.