Attending previous AIAS conferences, such as FORUM and Northeast Quads, acquainted me with the mission of AIAS to promote excellence in education among architecture students and the social networking events offered to meet other architecture students. Personally, I found Grassroots Leadership Conference as a life changing experience.

Besides the workshops, lectures and networking opportunities, I realized that I was part of something bigger than just an architecture students' convention. I had the opportunity to know other motivated students, who had a common vision to become great leaders and make a difference not just in their schools but in our society in general. 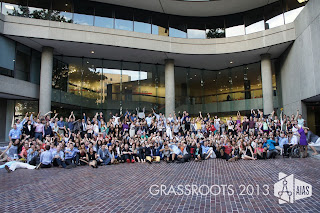 Grassroots Leadership conference took place on July 25th to July 28th of 2013, at the Clinton Old town Alexandria Hotel in Alexandria, VA. AIAS BAC arrived to the conference at night of July 24th to prepare ourselves for the morning kick out session. The conference was organized in three different pathways, where students were scattered in leadership, Freedom by design and Career Development tracks based on their personal interest. Being the delegate from our AIAS BAC chapter, it was mandatory for me to attend the leadership track to receive a formal training in all the aspects involved to run an AIAS Chapter.

The first day started with the Autodesk boot camp, which I was part of. We were introduced with the new version of Revit 2014 and the new features in it. It was an intense session that started with beginner tools like doing basic walls, roofs to more advanced tools like creating new families with specific parametric instances. 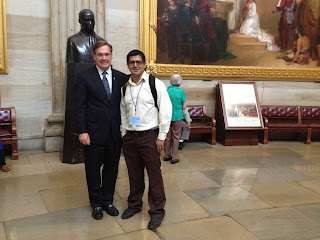 Later, we continued the day with a tour to the Capitol Hill Building, which was guided by the 11th architect of the Capitol Stephen T. Ayers, who was chosen by president Obama in 2010. The tour started with a short film about the beginning of the constitution, the merging of other states and the creation of new laws and acts to become the USA we are living now. The architect of the capitol also shared personal experiences, and advised us to consider the idea of pursuing an architecture career in the public sector. The tour was followed by the kick out session at the national museum building where the new national board of directors got officially positioned to their specific roles by the AIAS Past President Matt Barstow and Past Vice President Brent Castro, who did a great job leading our organization last year.

At the evening, we had our first social event where we had the opportunity to talk to other student’s chapter leaders. BAC chapter was committed to network and connect with as many people as we could. I am not going to deny, we were little shy at the beginning, but it was a great experience knowing that other students were also open to talk and eager to meet other folks as well. We met students from all regions. More importantly, we were committed to meet Boston local chapter’s leaders who were very friendly and motivated, that we are already planning to do cross-chapter events in the near future. 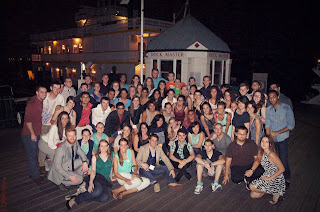 On Friday, we were separated to our different tracks. On my session of leadership track,  we had an intense day with  leading speakers of the national office giving us valuable information that would assist us on running  a successful chapter. Before the leadership tracks started, I was unfamiliar about the content of these sessions, but I was eager to absorb all the information presented to us. Surprisingly, it became, the most valuable and influential leadership session I ever had.

At the end of the leadership session, I could see the smiles on the faces and I felt the energy of chapter leaders who were enthusiastic to go outside and make a difference in this world. The day ended up with a barbecue evening at the headquarters of the AIA and tours to Washington Monument and the Lincoln Memorial. Moreover, the BAC chapter made new friends and we all got together to visit the Vietnam memorial by Maya Lin and explore Washington DC as well.