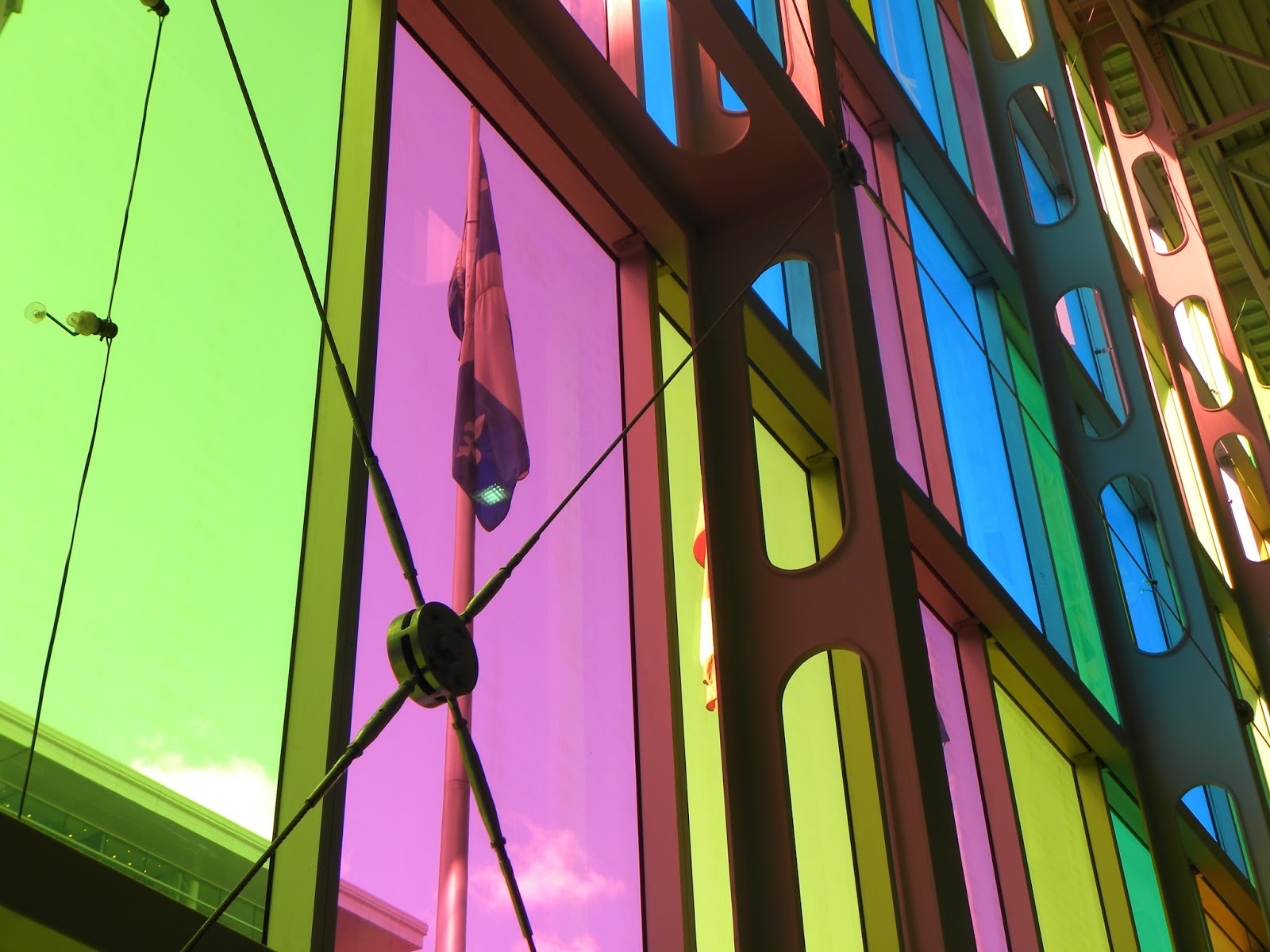 As design students we study space, and it is crucial that we learn by actually experiencing spaces rather than simply reading about them and looking at pictures. Although Boston is a beautiful city, its lack of architectural diversity makes it necessary for us to travel in order to experience a wider variety of design that can broaden our perspective and deepen our understanding. Fortunately there are a number of great cities that are within a reasonable driving distance, one of which is Montreal. 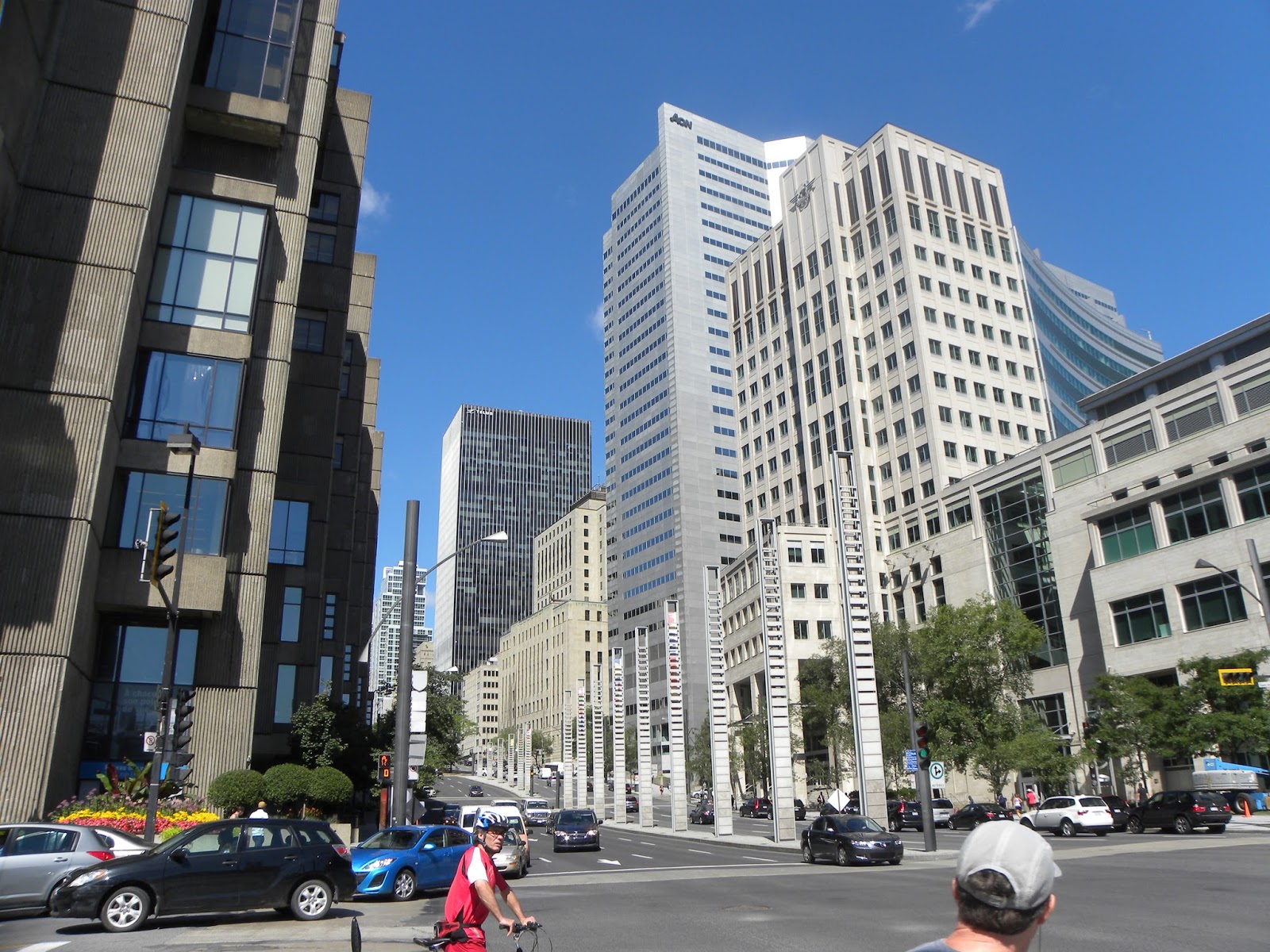 Montreal’s greatest strength, regarding design, is its balance of old and new. For more than two hundred years from the time the city was first settled by French Roman Catholic missionaries in the middle of the seventeenth century, powerful religious beliefs resulted in the dedication of a great deal of time and energy on building magnificent churches. 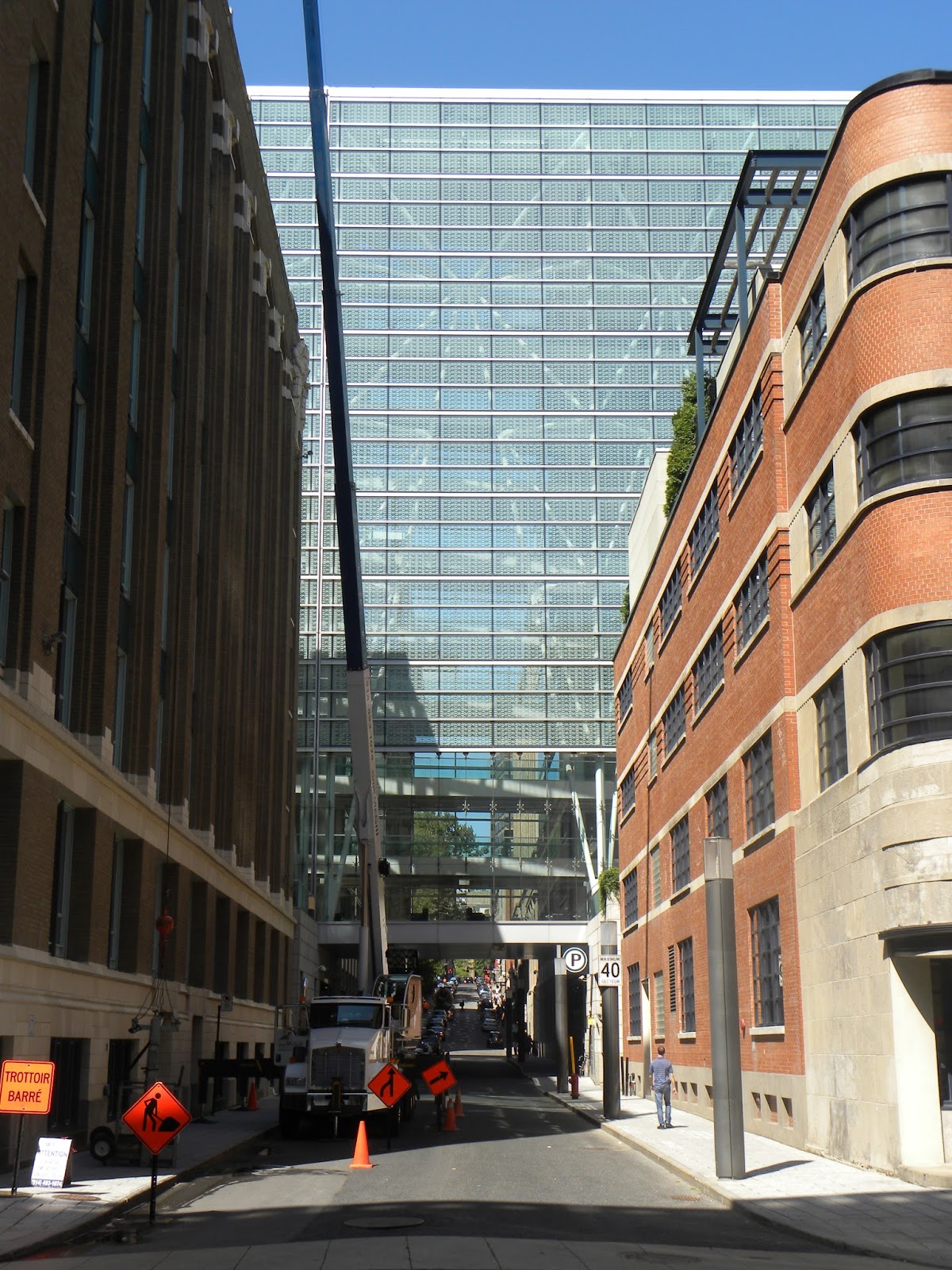 Throughout the past hundred years, especially since the 1967 International and Universal Exposition that called for the construction of Moshe Safdie’s Habitat 67 and the Montreal Tower, the city has become a center of modern and progressive architecture. Walking through downtown, it seems as though every single modern building was designed in a truly thoughtful manner. 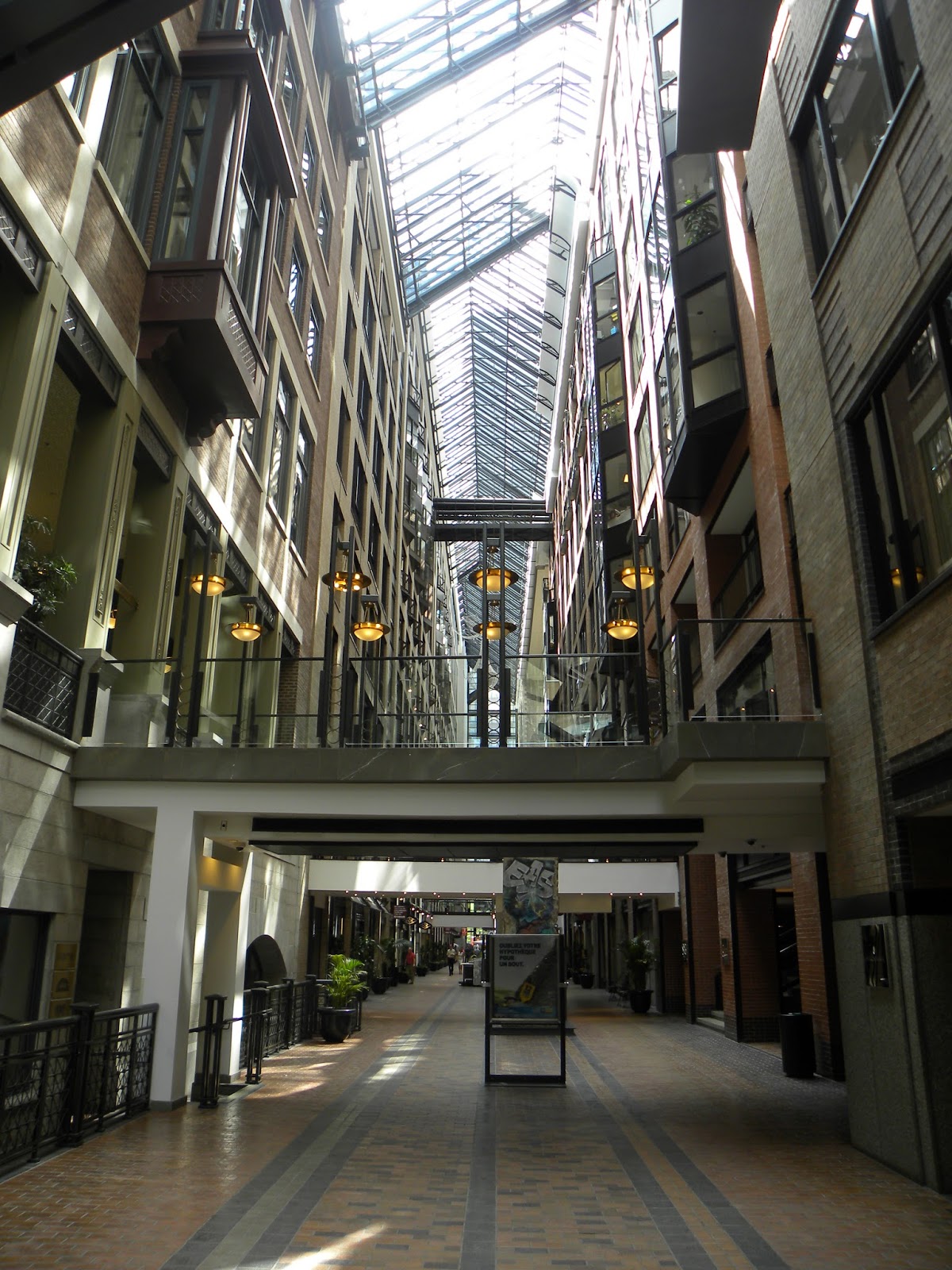 Interior malls are created by covering an alley with glass

The importance of architecture and design in Montreal is embodied in the CCA, the Canadian Centre for Architecture, which includes a museum, an international research center and student accessible reading room, and a renowned library. 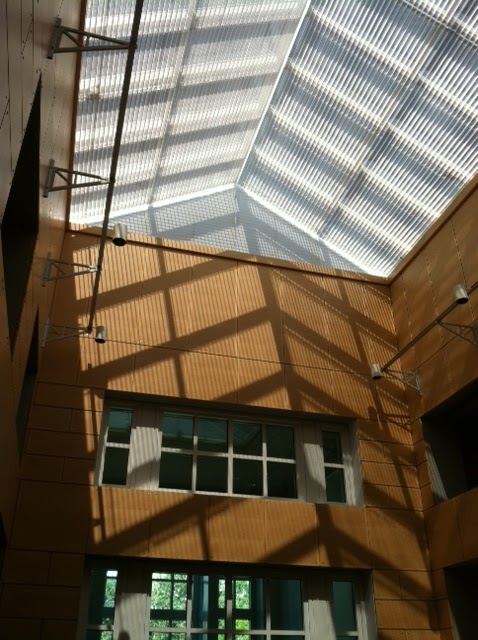 Light and shadow are dominant features of the CCA's design

The CCA combines an original nineteenth century mansion and a postmodern building that was designed in the early 1980s in the Critical Regionalism style, which strongly emphasizes the heritage of a local culture and environment while incorporating technology. At first glance, the two buildings appear to be strikingly different yet very complementary. This is because the new building used the old one to determine its architecture such as the size and placement of cornices, windows, and other details. 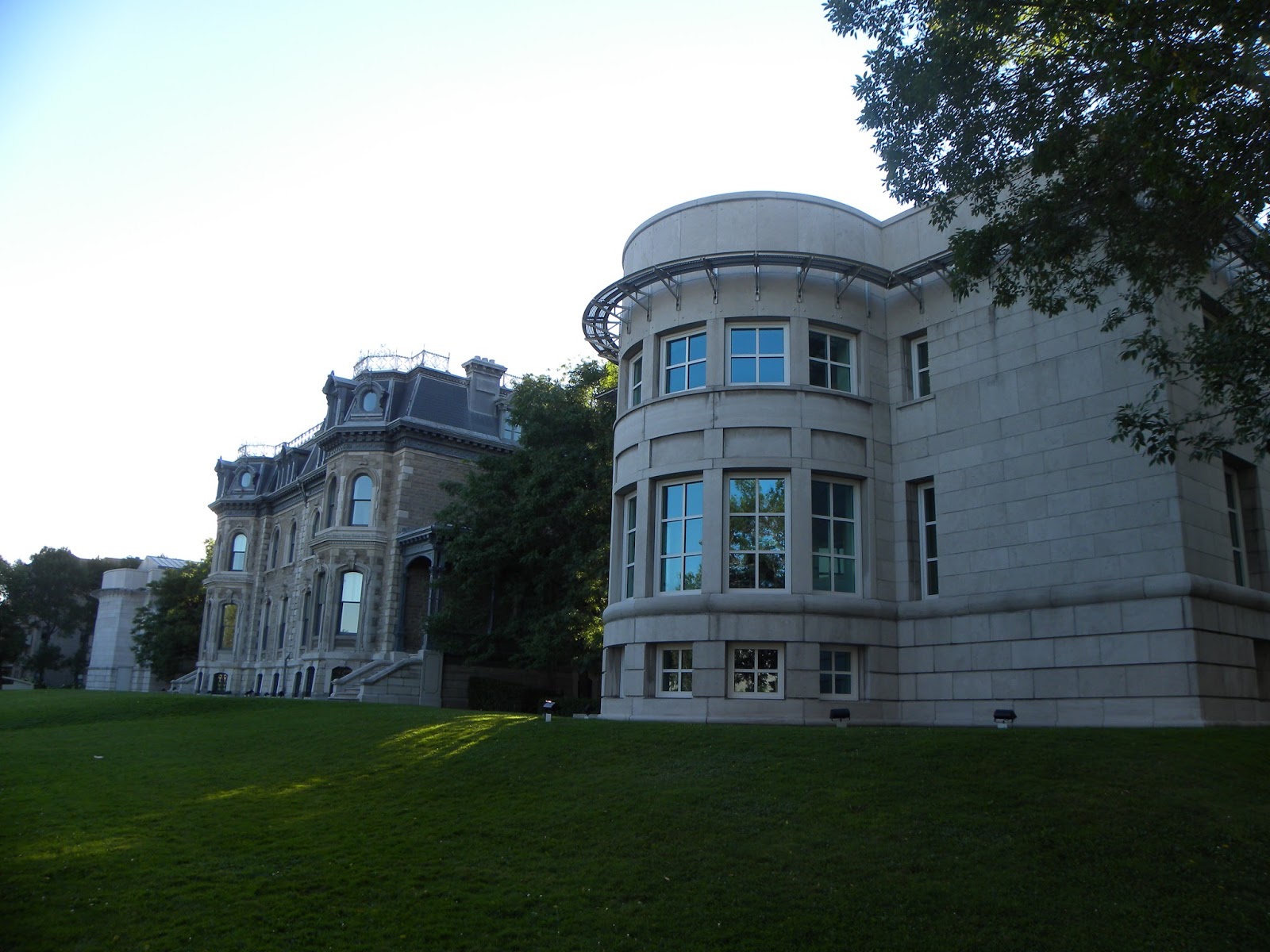 The museum’s garden is an excellent example of historically influenced landscape architecture. Although it has a distinctly modern vibe, each of the elements was determined by the history of Montreal. Apple trees symbolize the seventeenth century priests who settled Montreal and planted extensive apple orchards; low walls that organize the space are reminiscent of the prairies that were developed during the eighteenth century as the city outgrew its original island; a large wall mirrors the nineteenth century mansion that was incorporated into the museum, which was typical of the upper class merchants that developed the city’s economy at that time; a series of sculptures clearly represents the various twentieth century factories and industrial buildings that can actually be seen from the upper terrace on which they are placed. 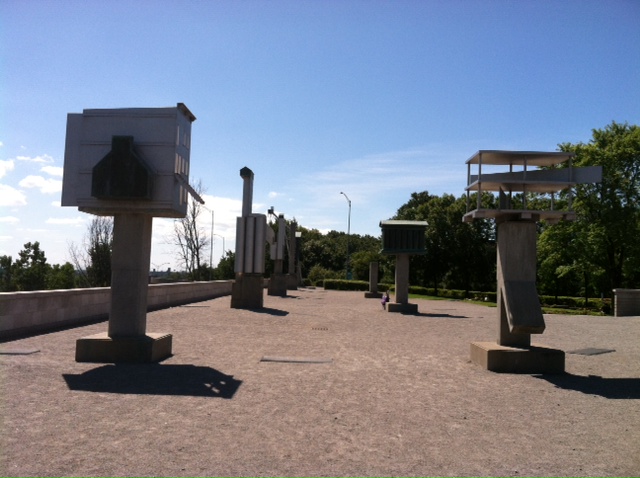 The sculpture garden at the CCA, including a nod to the maison domino on the right

The research center and reading room were inspired by the Ancient Greek agora. The amazing collection of architecture and design books is accessible to students, who only need to visit the CCA website and request materials in order to view them the following day. For anyone who is preparing to begin a major project such as degree project, or anyone who has a keen interest in the history of architecture and design, this is a wonderful resource to have access to. 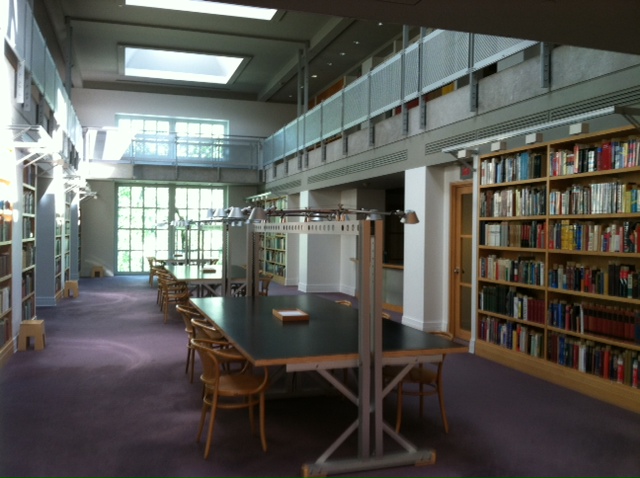 Reading rooms at the CCA are designed in the agora style

Another example of the modern side of design in Montreal is the excellently designed Palais des Congres de Montreal, which serves as the convention center of the city. Originally built in 1983 and then expanded and renovated from 1999-2002, the extensive complex of large spaces connected by wide hallways is an intriguing blend of different architectural moves. 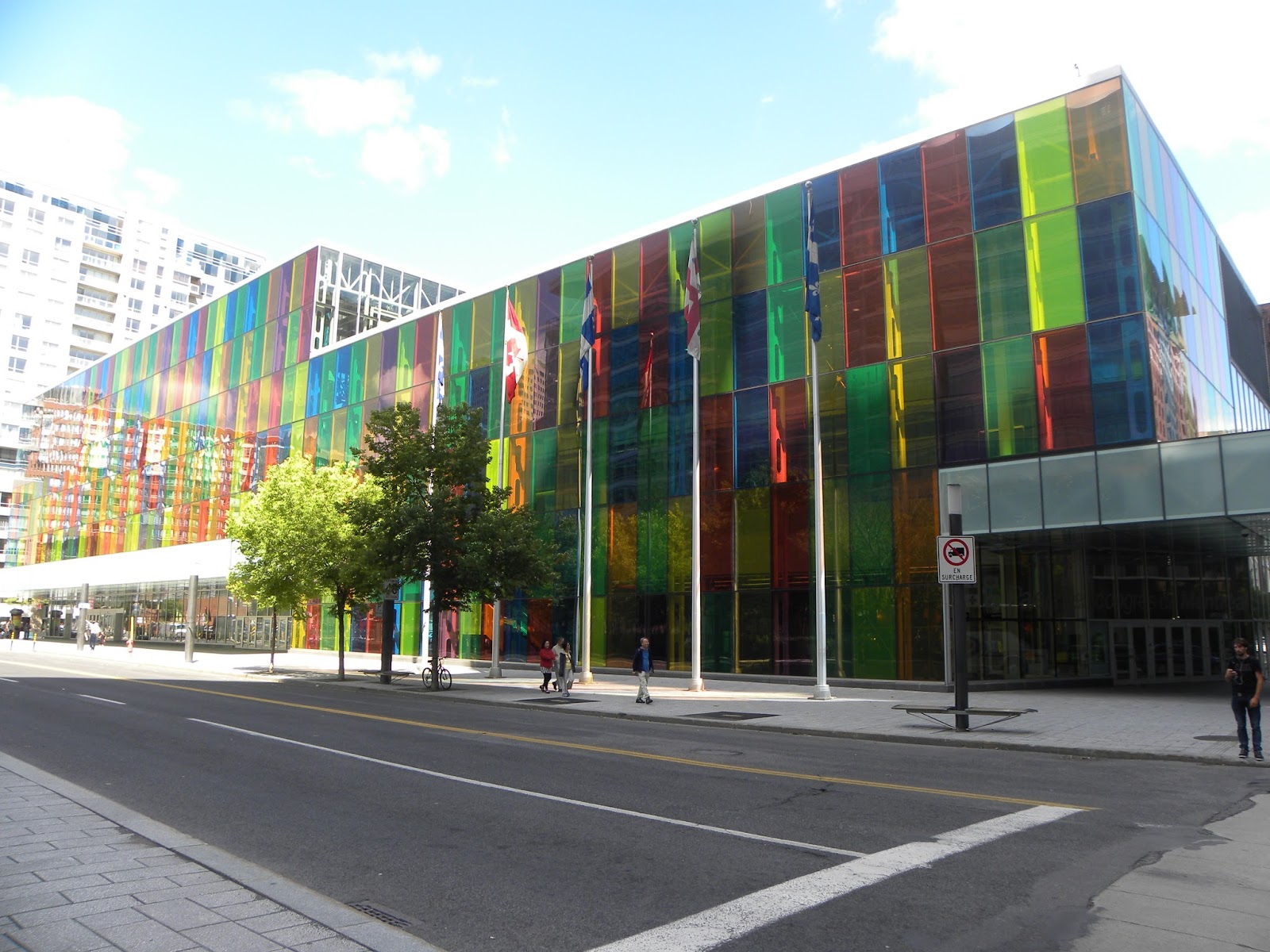 The strongest aspect of the design of the Palais des Congres is the way in which it pulls one through each space. From several blocks away, the multicolored glass curtain wall immediately creates interest in the building. Upon entering, the colors that are splayed across the floor as light shines through the glass encourage visitors to continue moving through the space. 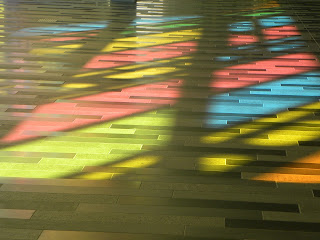 At the end of this hall is an interesting use of tree-like elements as support columns that begs to be looked at closely. The end of the next hallway is a beautiful set of lights hung vertically. This technique continues throughout the entire building, and strongly encourages visitors to explore the entire complex of spaces. 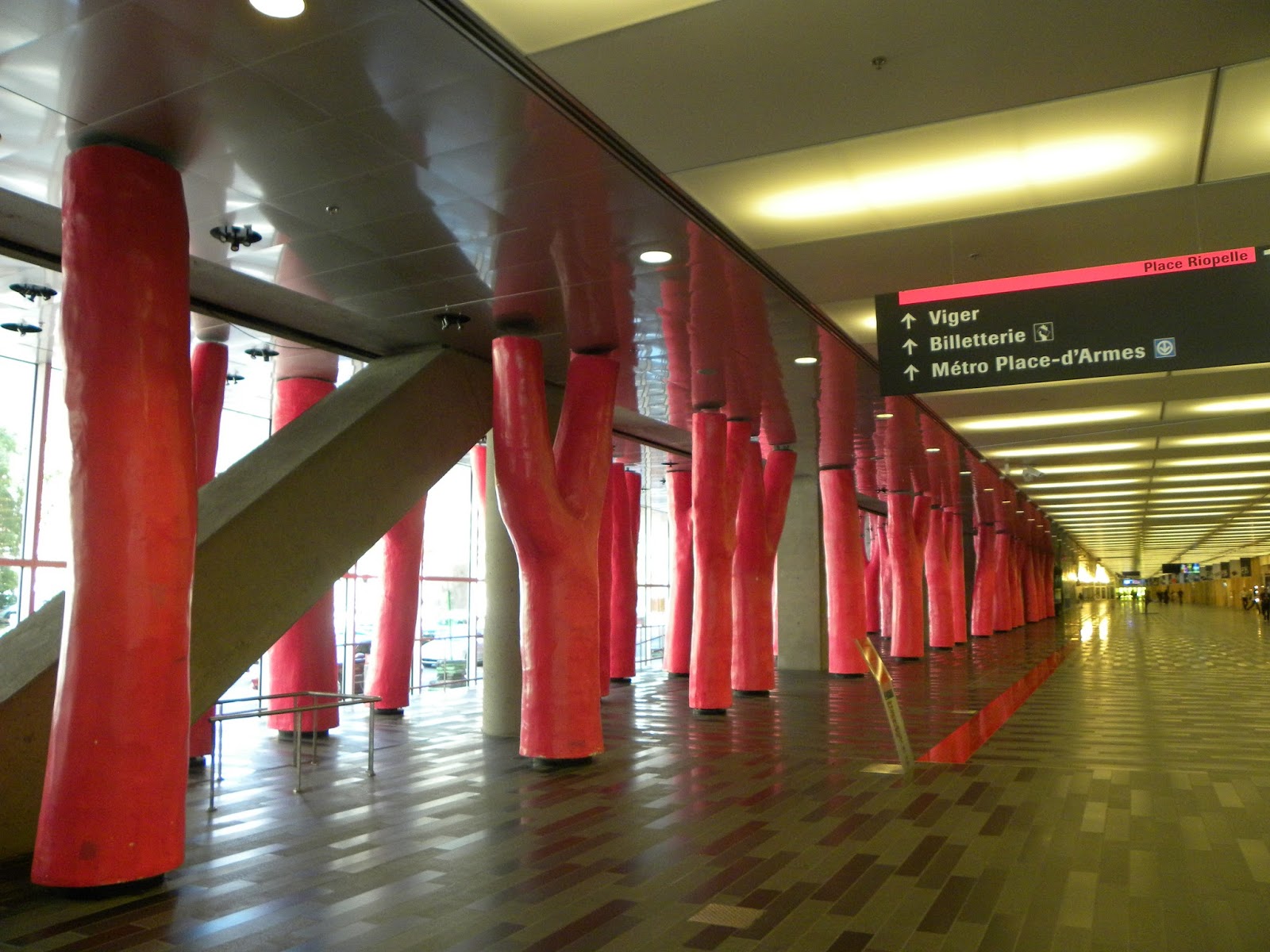 Tree-like columns bring themes of nature into the building

Contrasting the strong presence of modern design in Montreal is the beautiful historical church architecture, of which the most famous example is the Notre Dame Basilica. After the original church was outgrown, the current Gothic Revival style building was constructed from 1824-1829. The façade is a traditional example of the style, with the symmetrical arches, windows, and bell towers resembling the most famous French Gothic churches and cathedrals. 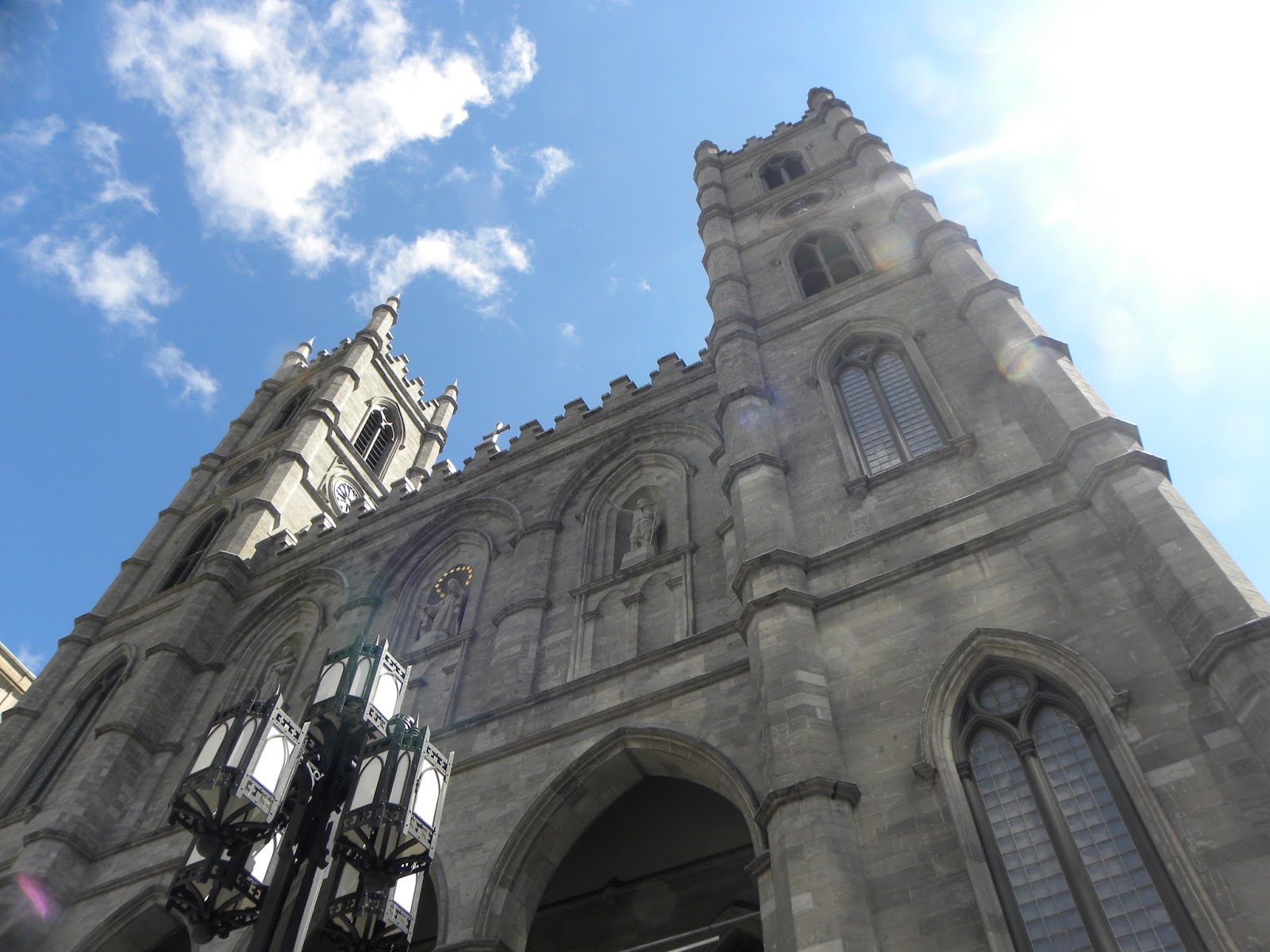 The Gothic facade of the Notre Dame Basilica

The interior design of the Notre Dame Basilica is breathtaking. The combination of Moorish balconies, Byzantine columns and moldings, and a Gothic altar are all influenced by Saint Chappelle in France, as is the strong use of blue which is the color of Mary, in whose name Montreal was originally founded. 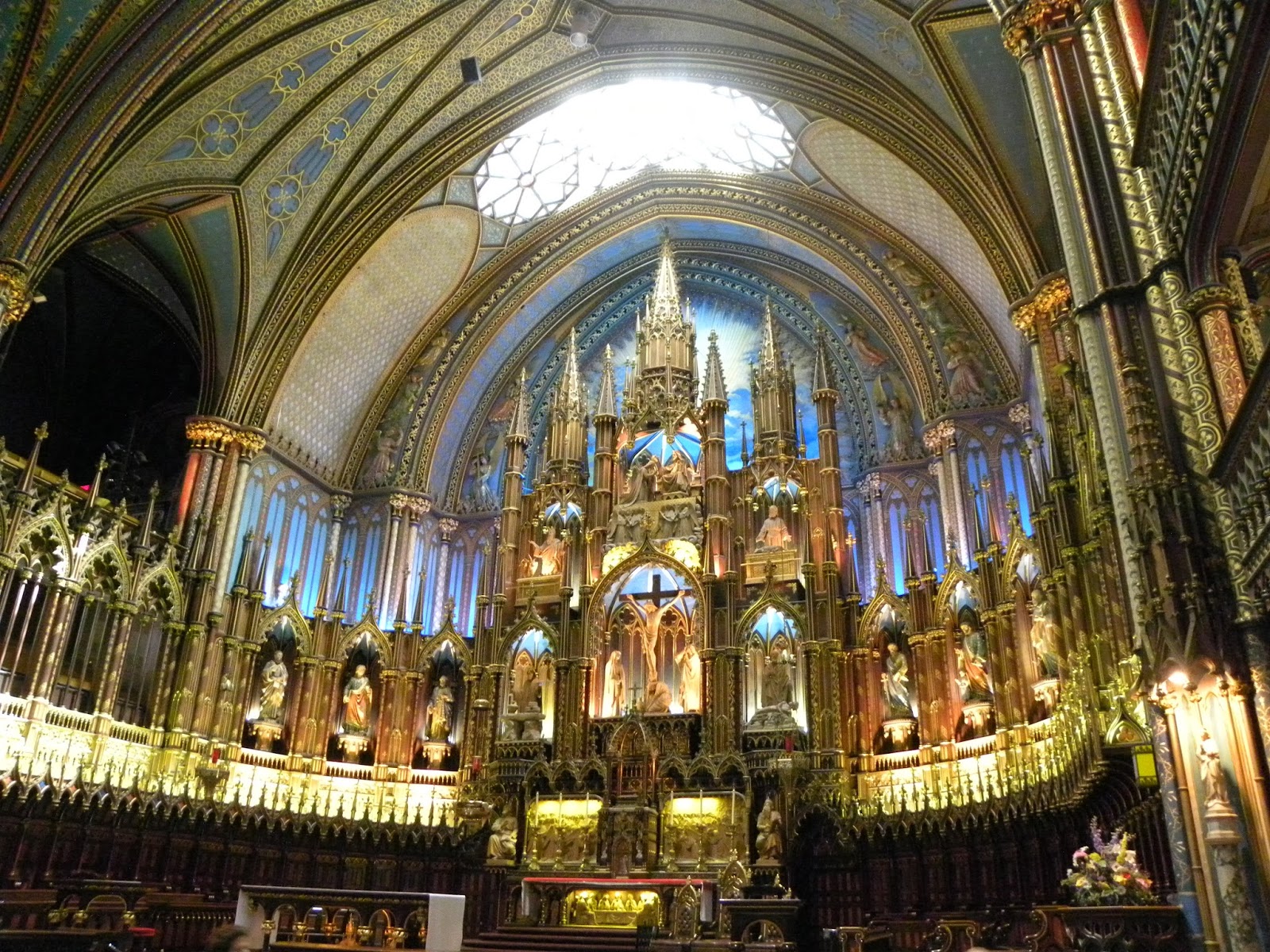 The interior was heavily influenced by Saint Chappelle in France

Another major example of church architecture in Montreal is Saint Joseph’s Oratory on Mount Royal, which began construction in 1904. The church, in a manner the parallels the architecture of Montreal as a whole, has combined old and new by building a new, modern style church above the smaller original chapel. 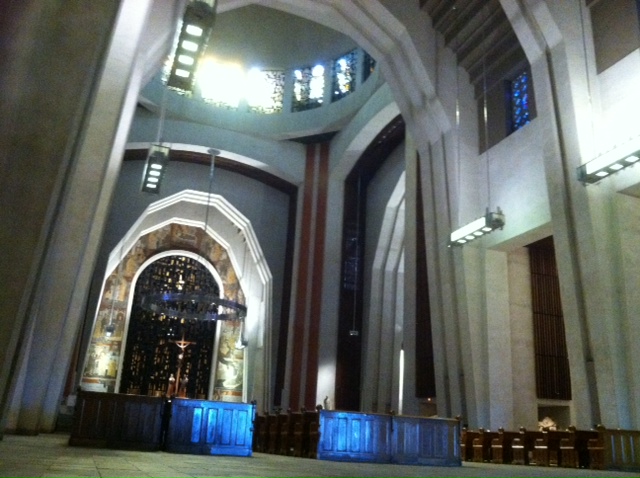 The newer addition to Saint Joseph’s Oratory utilizes color and light to create a striking effect. The sleek light fixtures and moldings add to this unique atmosphere by stripping away and simplifying the physical elements while simultaneously enhancing the environment by limiting distractions. 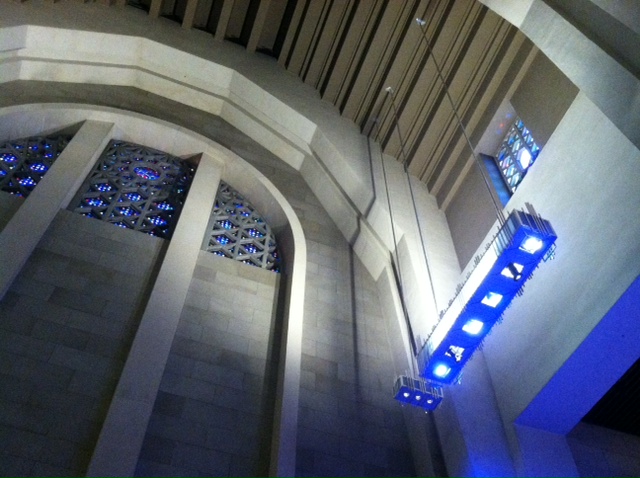 The CCA, Palais des Congres de Montreal, Notre Dame Basilica, and Saint Joseph’s Oratory are only a sample of the countless examples of great design in Montreal. Visiting these places and fully experiencing them, especially through sketching, provides a better understanding of how different styles of architecture work and how specific design decisions affect the spatial experience. 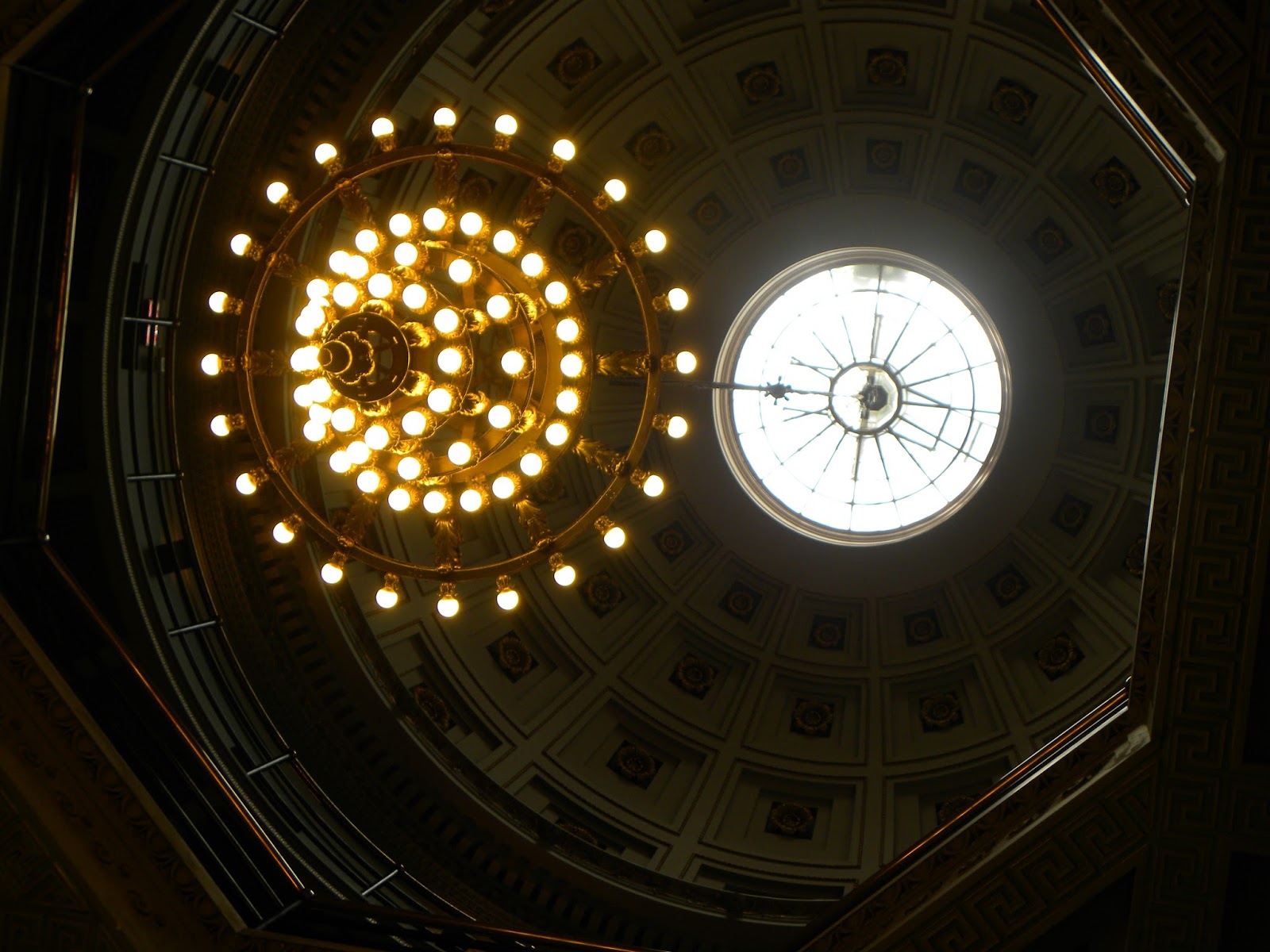 Dome of the Pantheon-inspired Bank of Montreal headquarters

Montreal is about a six hour drive from Boston, so it is easily doable. There is so much to do there in addition to looking at design, so you can take a break as well. A lot of people speak French there, but nearly everyone speaks English so there are no language issues. Just remember that you need a passport to get into Canada. If you are looking for something to do over Thanksgiving Break or Winter Break, find a friend with a car and go check it out!