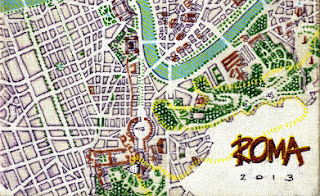 "Studying in a place with so many layers as we talked about makes it suddenly clear to a design student that your designs are not unilateral. Every intervention you could possibly make in Rome carries the history of context and will likely be re-imagined after your departure. Engaging in that dialogue can be invigoratingly freeing rather than inhibiting. Just ask Michelangelo! It might have been the first time I learned to take a bold stance that you are fully aware is temporal."
--Joe Porter, MArch Candidate

Right now there is a gallery of images, sketches, paintings, and other things collected by the students who took part in the Summer 2013 Study Abroad Trip to various parts of Italy. The trip was lead by Richard Griswold, Associate Provost and Dean of Students; and Jovi Cruces, Senior Associate at Dimella Shaffer Associates.

You can learn just what you are missing by looking at the gallery just outside the computer labs in the 320 Newbury St building. Everything hung up there is overwhelming to take in all at once, yet glancing or analyzing at it is time well spent. This gallery was not placed for the mere purpose to display the places visited through the study abroad in Italy, but to convey the importance of study abroad in your BAC career.

As you explore the gallery, you might have noticed a belt of neat laid-out pages with nicely crafted drawings and diagrams at your eye level. It wraps the whole space. It starts with a hand-drawn map of Rome with "Roma" written in brown on the bottom corner, and it goes around to the left. The often-accused-of-OCD author's name is Joe Porter, and what is to follow is based on an interview with him.

In a raw form, the program begins with pre-departure research about the buildings and places soon to be visited. And after you research comes "what is so awesome about studying abroad," said Joe. "In this phase of the program, one becomes divorced from all your common context and practices; although you always carry your attitudes with you, upon arrival you realize that everything is no longer applicable. You get to think on your feet." At this point in the program one learns to change previous design ideas, perception, and foreseen expectations. 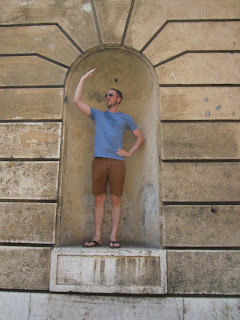 In Joe's case, when he first researched the Maxxi by Zaha Hadid, he believed he would strongly dislike the building. It disregards a response to the site, the constant angle change of the walls takes away from the experience of the art inside, and there is simply too much occurring at once inside to be a museum. Yet, upon visiting the museum he was pleased to be "delightfully wrong. And to be able to prove one’s thesis on something you have spent hours on is overwhelming,” and something that he said was only able to be felt by travelling as part of his study. 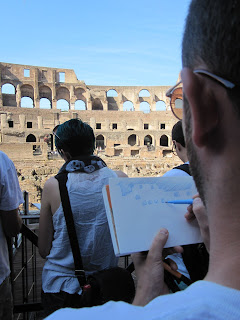 Study abroad program gives you the opportunity to take control of your education. Upon starting the program, each student can customize their classes toward their own interests. Joe realized a need to master the speed and recollection of data, thus he chose visual journaling techniques. With this, he accomplished a great sketch book that is organized chronologically, and with a consistent layout that allows for the information to speak for itself. Joe drew sites as he visited them along with the group of students on the summer study abroad program, and he already had amassed pre-departure research about each site. After sketching, and writing about each site, he combined his research with his drawings and musings, adding layers to previous drawings to make new discoveries, creating neat visual representations that spoke for the information needed; making sense of it all. See some of Joe's sketchbook here.

The layers that he constructed and the way he added information helped his learning process. This was a motif also present in the urban fabric of Italy. But I cannot explain with words what his images are able to tell. I suggest that you look at the pages from the sketchbooks, read of their stories and experiences, and consider if you would like to make studying abroad part of your educational experience at the BAC. 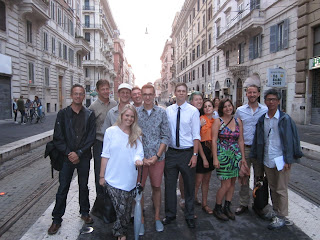 Richard Griswold is currently looking into the possibilities of a Summer 2014 Study Abroad Trip to Istanbul. If you are interested, click here to learn more.