A Christmas Story :: Did You Know? 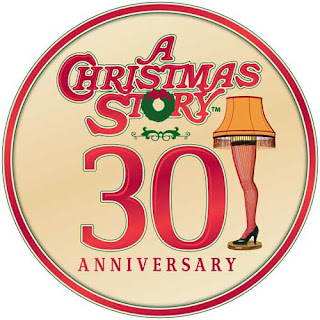 It is the 30th anniversary of the Christmas classic A Christmas Story.  In honor of that here are some fun facts about the film. If you have somehow never seen the film, tune into TBS all day today and enjoy the all day marathon!

Fun Facts:
- The movie was actually filmed in Cleveland, Ohio and Toronto, Ontario. The house from the movie is located just outside of downtown Cleveland and the Higbee building still stands in downtown Cleveland. The Christmas tree shopping scene and many of the inside shots of the house were filmed in Toronto, Ontario. One of Toronto's trademark red trolleys can be seen driving by the shot of the outside of the tree lot. Ralphie's school exteriors were filmed at Victoria School in St. Catharines, Ontario, Canada.

- To find an American city resembling an Indiana town of the 1940s, director Bob Clark sent his location scouts to 20 cities before selecting Cleveland as the site for filming. The decision to film in Cleveland was due to the willingness of Higbee's (an actual department store) to allow the movie to be filmed inside the store.

- For the scene in which Flick's tongue sticks to the flagpole, a hidden suction tube was used to safely create the illusion that his tongue had frozen to the metal.

- The Radio Orphan Annie decoder pin that Ralphie receives is the 1940 "Speedomatic" model, indicating that the movie takes place in December, 1940. Different decoder badges were made each year from 1935-1940. By 1941, the decoders were made of paper due to World War II metal shortages.

- Jean Shepherd's book "In God We Trust: All Others Pay Cash," which "A Christmas Story" is based on, is a collection of semi-autobiographical short stories that Shepherd wrote for "Playboy" magazine during the 1960s.

Check out more about A Christmas Story here!