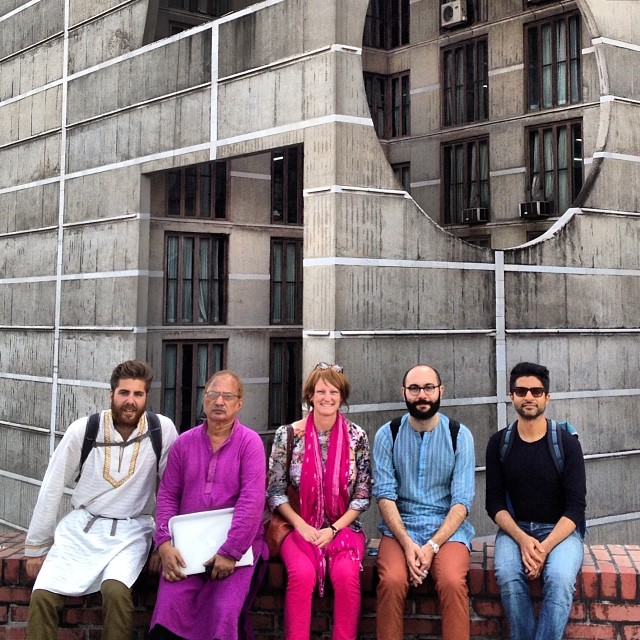 Arlen Stawasz is a recent graduate of the BAC, and recipient of the 20xx Ames Scholarship.  I had a chance to sit down with Arlen recently and discuss his approach to the scholarship and how his project has affected his professional work.

What drew you to the Ames Scholarship?
The Ames scholarship is one of the capstone scholarships of the school, but the approach that I took, and I would hope that many people would, is that this is the beginning of a life’s work.   It’s about understanding what you want to do with your life and how this scholarship can be a catalyst for that.  So my general interest in the scholarship came from my degree project at the BAC.

What was your project?
My project was a library of climate change, and responded to rising sea levels.  It served as a beacon to tell the story of how climate is changing, but also how we should really prepare ahead for these major emergencies that could happen within the next hundred years.

My response to the scholarship was to take that and bring it to another level.   I wanted to go to a place that really started to look at those issues of flood resistance and emergency/disaster response architecture.   I asked myself two simple questions:  “What country is the most advanced in thinking about this technology, has been dealing with these water issues for hundreds of years, that can start to inspire our cities along the coast to respond effectively?”  And then I asked myself, “What is the country that is most affected by seas level rising?”  Those two countries, based on my research, happened to be the Netherlands, which has the most technical approach to living with the water, and Bangladesh, in terms of the amount of population that will be damaged by the sea level rise.

Both of these countries have been dealing with the issue for hundreds of years.

Was your intention to investigate how the techniques the Dutch were using could be used in an area like Bangladesh?
I went to the Netherlands to see how they were dealing with the issue, and I went to Bangladesh to understand how they were dealing with the issue.  But since being there, I learned that you need to take the best of the two countries, figure out what’s important, and that’s how you apply it to what is appropriate at the time, for [whoever is addressing the issue].

Is the sea level rise a problem Bangladesh is even dealing with right now?
Bangladesh is a country at extreme risk, and they don’t have the money to build infrastructure. They migrate away from the issue.  Their process is understanding that they cannot battle this major issue.  They are moving away from it.

The Dutch have actually gone to Bangladesh and built many dikes for them – but didn’t take into account the monsoon rainfall.  Many people lost their land because of that.  So there are many lessons to be learned on how maybe a solution isn’t the best solution for the purpose.

What works in one area doesn’t necessarily work in another.

Absolutely.  And I think that is the key major point that I’m bringing back.  This is such a major issue in the world.  It’s a geographical phenomenon.  The amount of urban disasters by flooding in 2011 alone was $380 billion, in the world.

I’d say that’s part of the reason why the scholarship committee was very interested in investing it into me, considering I was interested in going after this really topical thing and bringing it back to Boston.  This is a real issue.  We should look at how we can prepare for this, but also how we can help others.  It’s a world issue.

What were your dates of travel?
I was gone from late September to Thanksgiving day.  The time was chosen to avoid monsoon season in Bangladesh because during monsoon season you can’t travel anywhere, and I wanted to be able to see as much as I could.

If you could narrow the experience down to one life-changing event that the program allowed, what would you say that was?
The scholarship opened up so many doors, developed my network internationally.

I was offered the opportunity to do a specific kind of research with climate refugees and developing a sense of housing that allowed people to pack up and leave; as if their house in in a suitcase and they can just pack it up and go.  You should go to a place that best responds to the vision and mission of what you want to do with your life.  You can do your service as an architect and interact with people who are in need of housing.  Be a capital-A Architect, of providing housing for people.  What a tremendous opportunity!  For some, it could be about transportation, or social community issues; there are so many different values.

How have you been able to apply the lessons you took away from your trip in your current work?  You talk about a life's work, but how does that apply when you just have a position working in a firm?
I started by getting involved with the sustainable design committee in the firm.  That led to me giving an office presentation on my thesis project.  My thesis project received a lot of support from the office, and that led to my involvement with the Urban Land Institute in the city and the Climate Adaptation Committee of the State of Massachusetts.  So now I’m taking all my research and reporting back to these organizations, which are the decision makers for Boston.  I also try to share my knowledge and my experience with everyone I can.  Think of this scholarship as a way to share your research with political entities and architectural practices that are dealing with these live issues in the world.  That’s the service of the scholarship.  It’s not just a bout you going, its about how you bring it back, whether it’s publication or teaching and inspiring others.

Photographs from Arlen’s trip can be found at http://arlenstawasz.tumblr.com/