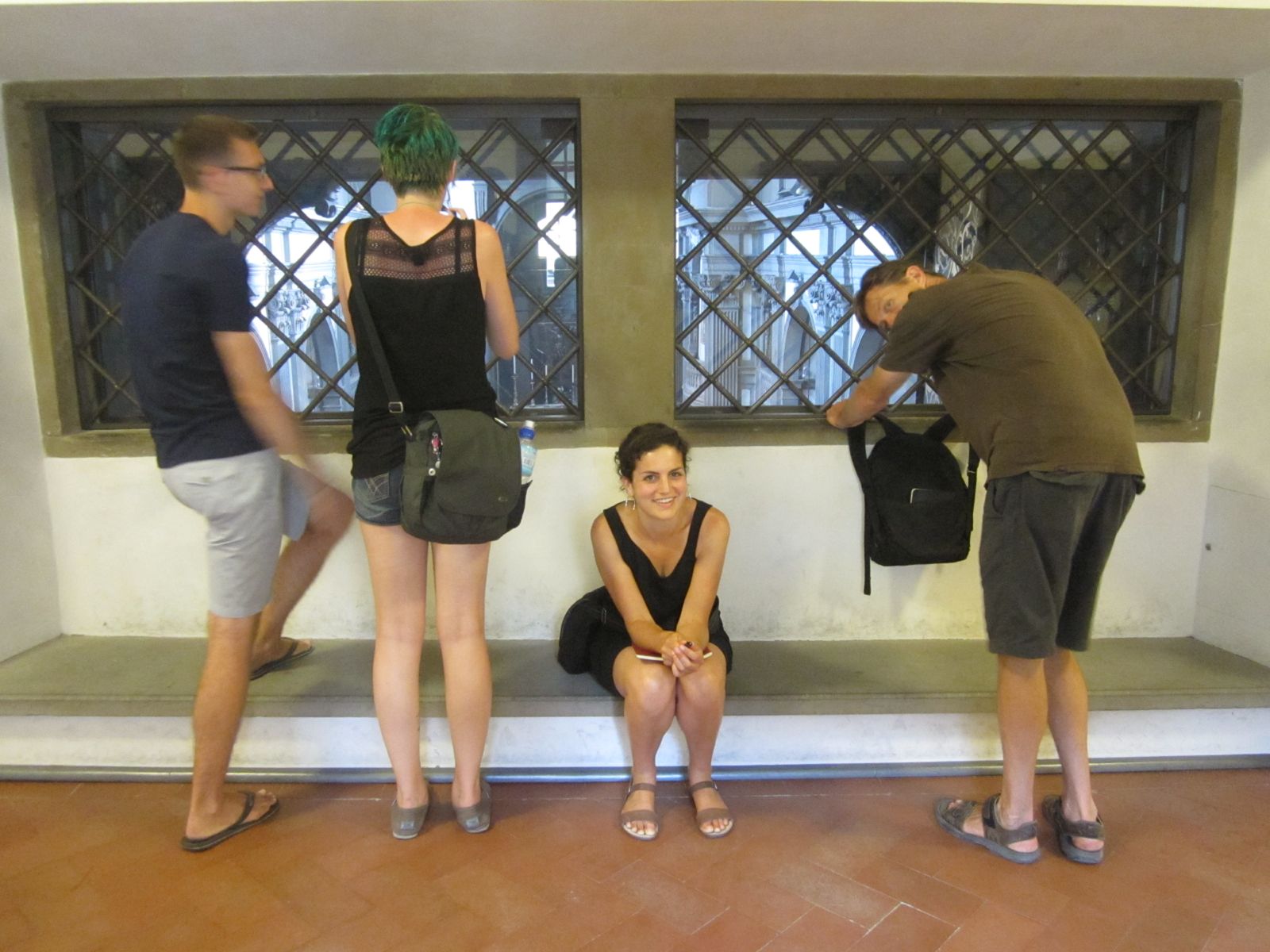 Last summer, Dean of Students Richard Griswold and Instructor Jovi Cruces led a group of students on a study abroad trip based in Rome, Italy. The opportunity to travel and study the built environment in a place as ancient, as ripe with the evidence of its history as Rome is undoubtedly an invaluable experience for students. Recently I interviewed MLA candidate Julie Shapiro about her adventure in Rome, and what she discovered there.

Julie Shapiro went on the trip to Rome at the end of her first year of graduate studies in Landscape Architecture at the BAC. She earned her Bachelors from Oberlin College where she studied biology, and after finishing her undergrad she says that she explored a sequence of different options of career fields, from botany, horticulture and the arts, and was eventually drawn to study landscape architecture wherein she found an intersection of her interests in the arts and the sciences, plus creative problem-solving. Mid-way into her second year at the BAC, Julie reports that her ‘suspicion’ that this would be the right field for her has been more than confirmed. Julie works at Boston Arts Science Prize, where she coaches high school students on how to be good design thinkers, and she finds teaching immensely rewarding.

Julie says she had wanted to travel to Rome first because she was interested in the interaction of layers of history within the built environment, but that she was also interested in the challenge of Rome from the perspective of contemporary landscape architecture. She explained there isn’t really space in Rome for contemporary ‘designed’ landscapes, but there are landscapes being used in contemporary ways – like old aristocratic estate-lands that are now public parks, for example. Julie had never been to Italy before, and when she arrived she began the task of “non-stop exploring” to find what a ‘contemporary landscape’ could be in the context of Rome.

She got up early in the morning and started walking, and stayed on her feet until late into the night. Every day there was at least the option of a group activity, but as the only landscape student on the trip she was granted a lot of flexibility to shape her coursework and day to day activities. She spent a lot of time out on her own, exploring. “Walking was magic,” Julie describes, “I felt like my legs would never have to stop moving. I didn’t ever stop having energy, I had to look around – there was so much to see. I was like a machine … I was like a sensory organ, letting things come in and then go out on the page.” When asked what she discovered on her walk-abouts in Rome, she answered, “I started to feel like I was able to understand the language of the city, predict its moves, the way that streets would be used… [I was] letting it flow in until I could read it.”

The biggest discovery of hers was the neighborhood of Testaccio, and on it Monte Testaccio – the neighborhood’s ancient man-made hill. Testaccio is close to the ancient center of Rome – where the big tourist destinations are: the coliseum, the basilica of St Peter’s, etc.; but it’s separated by Aventine Hill – one of Rome’s seven hills. The topography protects the neighborhood from some foot traffic, because of this and other factors, the forces that have shaped contemporary Rome have largely missed this place. “[There] you felt like you were on the edge of things, the edge of Rome.” For Julie it was important to seek out those things about Rome that weren’t obvious, or ‘given’ to her as “this-is-Rome”. The neighborhood of Testaccio was for Julie then a less-traversed avenue by which she could get to know the city. “Testaccio is a working class neighborhood, which is very close to the center of Rome but doesn't feel tourist-y at all, which is really interesting. It is kind of strange to go there, you get off the bus and you feel like you are stepping into another world. There, grandmothers are hanging laundry, people are out having coffee, and it’s pretty quiet during the day, on a hot summer afternoon. The buildings in the neighborhood are mainly from the 19th century, and the buildings themselves are elegant-ish but in rough shape; as a whole the neighborhood has a kind of gritty, worn-out feel. But it is also in the midst of being repurposed. What was an old slaughterhouse now holds a design museum and a university… I think Testaccio might be about to be discovered, I'm not sure.”

The hill -- Monte Testaccio – is an ancient Roman landfill, a 110’ tall pile of pot shards. In ancient times shipments of olive oil would come up the river in clay pots called ‘amphorae’, and because the oil corrodes the clay pots could not be reused so they were smashed and discarded. “The shards aren't just thrown, you can actually see how they are carefully stacked in some places, interlocking the pieces in a very deliberate way -- in other places it's been disturbed, material's been taken away, maybe for construction of roads, [and those places] look like rock slides.”

The hill itself has a rich history of different uses. In the middle ages it was used for Vatican passion plays, games, sporting events, and festivals. And then at some point, people started to carve grottos into the hill because the porous shards allow air to move and so it stays very cool and is perfect for keeping wine. It became this center for revelry, and it still is because now these grottos house wine bars, nightclubs and restaurants. A large part of the hill was removed at one point for the building of St Peters, and in WWII the hill boasted anti-aircraft guns. Julie says that if you are just walking by you might not really notice, you’d see a large hill with trees and vegetation on it and broken pottery at the top but you might not realize that it’s pottery all the way through.

Julie described to me her first journey up onto the hill: “It’s an archeological site so you have to be with a tour to go up onto it – but I got up onto it, and that was incredibly powerful, because I got to see the pottery up close. And you can see people’s handprints, in the pottery. You can see where they shaped the pots, and fingerprints where they held the handle and closed the end… It made me cry. It's 2,000 years old, you know? Or more! And it's just been there…”

“…I feel very emotionally attached to it and I'm interested in articulating why, like is it just because it was a place where I felt a sense of discovery? I don't know. I don't know if I'll ever fully be able to say why it had this power over me,  but I'm really taken with the innate power of the place, like I thought it would be cool to go up this hill, I thought it would be really cool and fun. Then I went up and I saw the fingerprints… Nothing could have prepared me for how it felt to see those fingerprints on the pottery, being that close to somebody from millennia before.”

The capstone project of the trip became for Julie proposing a conceptual design to re-link the neighborhood of Testaccio with its gritty, post-industrial riverbank. Her proposed design borrowed the language of carving into the hill combined with the form of these broken shards carefully stacked onto each other, to create a stepped riverbank landscape that would house public gardens and community-owned spaces.

When asked how the Julie perceives the trip to Rome fitting into to her overall education at the BAC, Julie explained that more than anything the trip “really honed my observation and my drawing skills – these were things I already loved to do, look around and draff stuff, but it just made me so fast and also it made me more attuned to asking why spaces feel the way they do, and what are the elements of a streetscape.  And I think Testaccio in particular just made me really interested in 20th century landscape history, and cultural landscapes. Like the emotional impact of seeing the handprints on the pottery within this neighborhood where you could feel so many eras were still present in the material evidence of the hill. Cultural landscapes – landscapes that result from the support systems of major economies, like this area has always been kind of the service area of Rome going back thousands of years. The trip confirmed that I really like to just look, and to learn by looking and walking.”