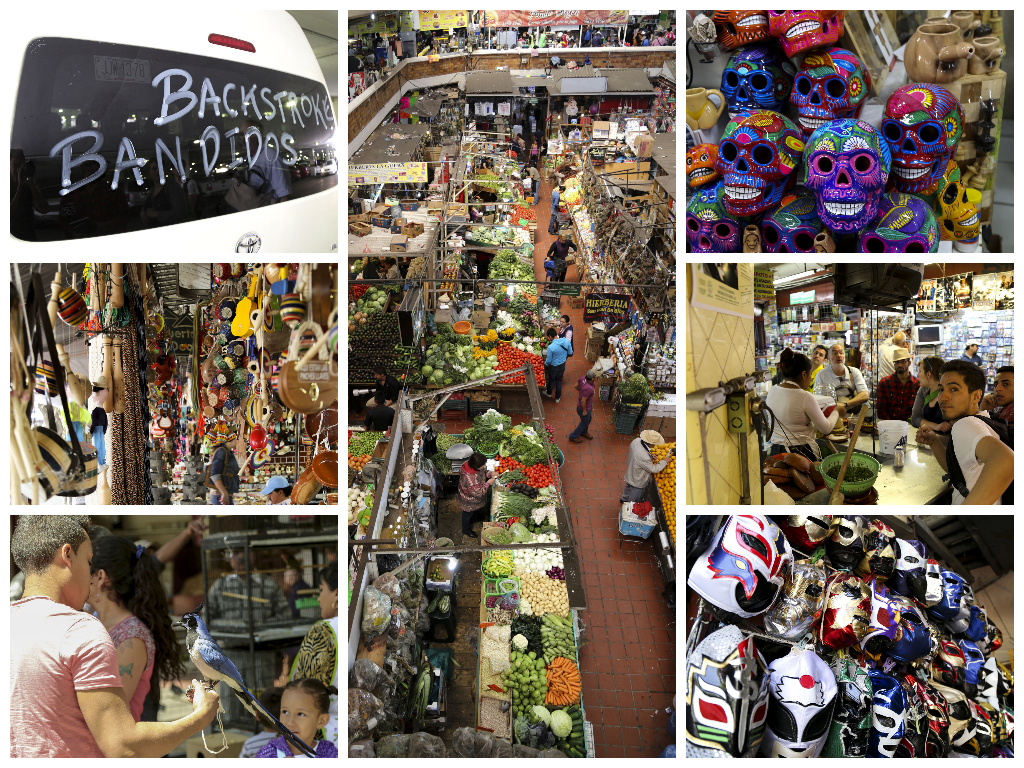 This post is number two in a three part series chronicling the travels of the Spring 2014 Mexico Studio. The instructor on the trip was Luis Montalvo, Director of Media Arts at the BAC, and the students were: Fernando Garcia, Jose Gonzalez, Marcus Cantu, Marwan Ghabour, Jamaal Siddiqui and Anastasia Lyons.

This was the third Monday in March, a federal public holiday that celebrates the birthday of Benito Juarez, an indigenous lawyer who was President of Mexico for five terms, who resisted the French occupation, overthrew a dictator, and modernized the country and we went to the San Juan de Dios market.

The market in Guadalajara is 4 open stories packed inch to inch with all kinds of goods: food, aqua fresca, clothing, trinkets, software, watches, jewelry, lucha libre masks, tooled leather anything, musical instruments, live birds, serapes, silk shawls, embroidered dresses, painted skulls – whatever you could think of. The atrium within this spiraling monolith of a building is full of birdsong and smells both like the fruit stands and the ranchero broths simmering upstairs. The sound of all the people, talking, yelling, bustling around the tiny paths carving between so many vendors, creates a constant drone of noise. Luis told the fruit stand vendor that I had never seen guanabana fruit before, and he cut me a piece for me to try. I tried so many fruits I had never seen before that my hands were sticky. Also quesadillas might not be the thing you think they are, but so much more awesome, like the best snack on earth: fresh, silky, stringy cheese pinched into a little corn tortilla, served with condiments including stewed cactus, bright pickled onions, fresh salsa, and creamy avocado sauce. Together we bought innumerable priceless souvenirs, and had a matraca (a Mexican noisemaker common in football stadiums) engraved with the name of our studio group: “The Backstroke Bandidos.”

Day 5: Llegamos a Barragán (We arrive at Barragán)

In the morning we went to the Instituto Cultural Hospicio Cabañas right as they opened. Built in 1810, this Hospicio was originally a charity hospital. Now a museum, it houses some of the most magnificent masterpieces by renowned muralist Jose Clemente Orozco, the same artist who painted the Hidalgo murals in the governmental palace we saw two days before. The main hall is immense in scale, featuring a series of arched panels and semi-circular vaults, all decorated with the feverish brushstroke of the one-handed muralist. It has been called the “Sistine Chapel of the Americas.” In the cupola of the main hall, in a feat of incredible foreshortening, a man on fire ascends into illusory space. In other panels, Orozco depicts the drama between indigenous and European forces in modern Mexico. The museum has exhibited the work of contemporary artists as well. Throughout the hospital museum complex, spanning across the hallways, empty halls, and 19 of its patios, French artist Daniel Buren transformed the spaces with site-specific installations built out of geometric shapes, color, and reflective materials. In “From One Courtyard to Another: Labyrinth – Work in Situ, 2014,” Buren’s expansive series of installations respond to the existing architecture, the arches and columns, creating a dialogue between old and new using color and light. 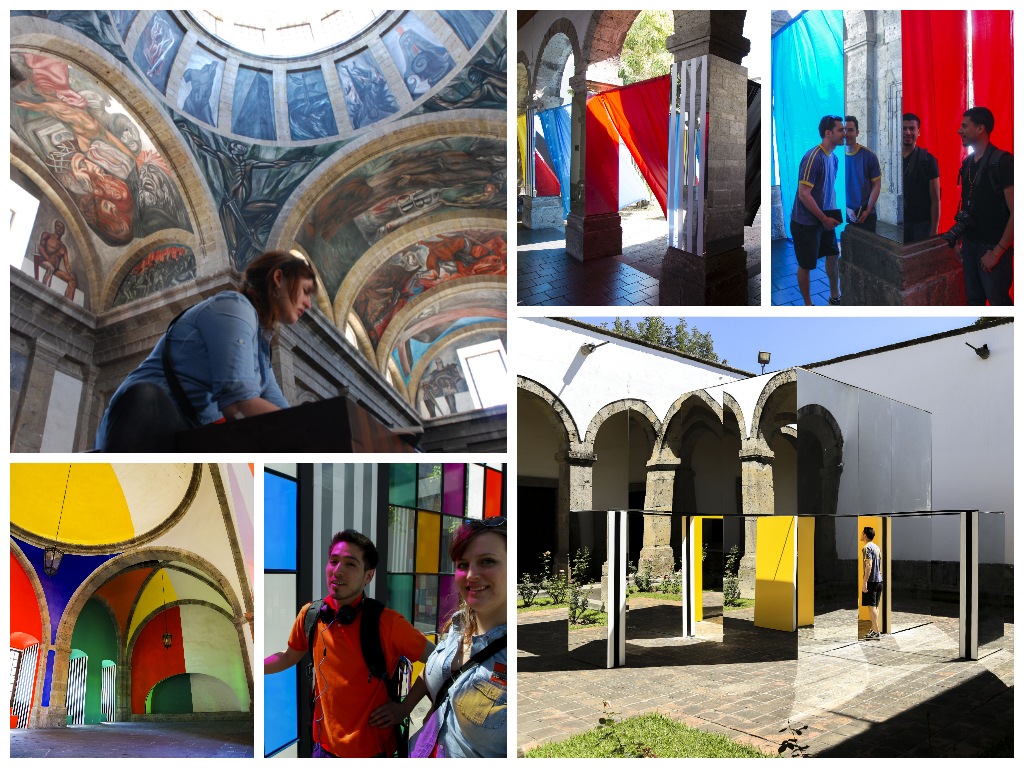 Finally, we arrive at Barragán.

Built in 1928, Casa Gonzalez Luna is one of architect Luis Barragán’s earliest works. An example of regional modernism, this house exhibits traditional aspects of Mexican architecture combined with the elements of European architecture that Barragán developed a taste for when he traveled in France in the 1920’s. On the outset, Barragán’s later work may seem like a stark departure from this early work, much as the late work of the European master Le Corbusier resembles little to nothing of his first Swiss chalet-style houses. Nonetheless, there is a processional element, as the visitor winds through the building to get to the roof terrace, encountering more and more solitary spaces along the way, which begins here and continues throughout Barragán’s architecture. 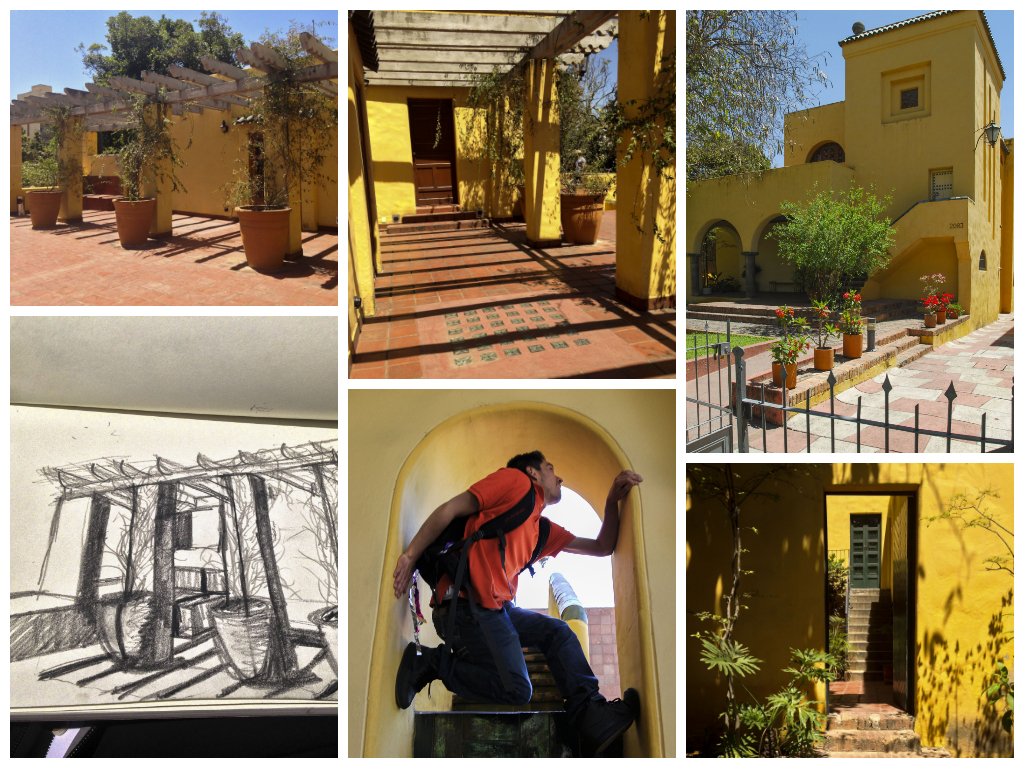 After a long, leisurely lunch we arrive at the second of Luis Barragán’s early works, Casa Cristo, built in 1929. This house is filled with references to the writings of French designer and artist Ferdinand Bac, whose gardens Barragán visited while traveling in Europe. In evidence to the influence of Bac’s gardens, there are orientalist touches – painted “china red” – in the details of carved doors windows and trim, that stand sharply against the clean white walls which signal the movement towards European modernism. Parabolic arches are painted red on their interior profile, and a tower looks over what must have used to be a slightly less urban landscape. In a series of garden patios containing fountains that we sat and sketched, Casa Cristo now houses some functions of the Guadalajara’s society of architects and is being restored. Where there aren’t offices crammed into odd spaces, the rooms stand mostly empty of furnishings, some paint is peeling, and the plants in the garden pots as well as the fountains have dried up. One has to imagine the gardens more lush, the rooms less vacant, and the surrounding buildings less imposing, in order to perceive Barragán’s design intent. 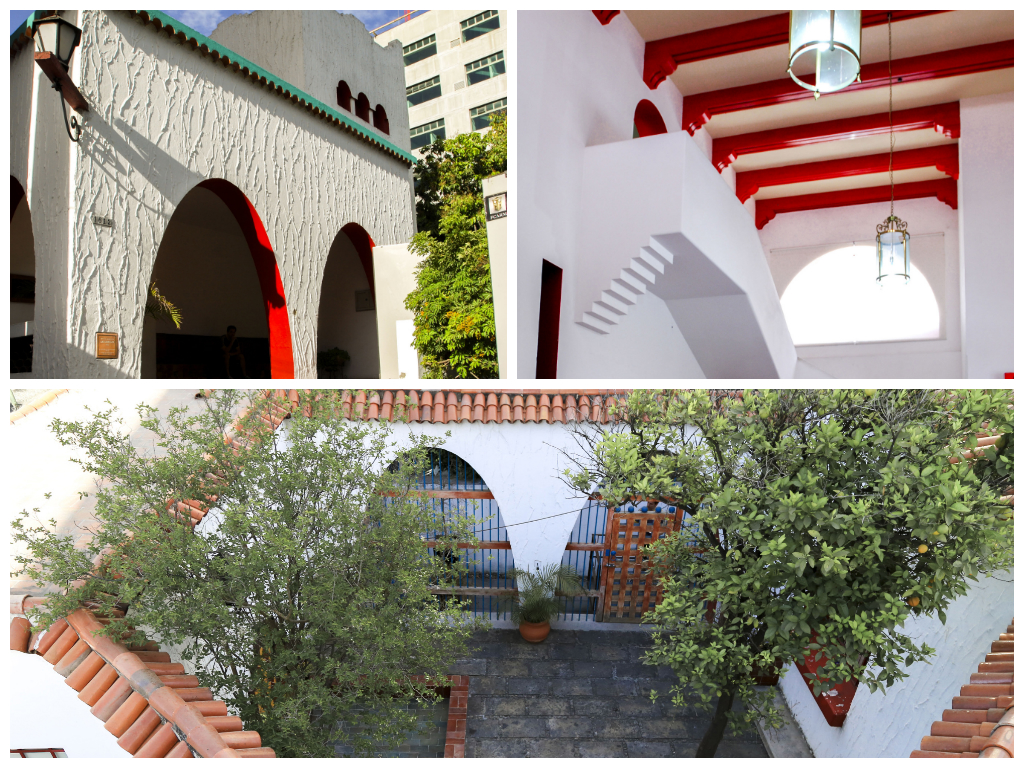 We fly out from Guadalajara and arrive in Mexico City in the late afternoon, and we spend what’s left of the day and into the night wandering the historic center of this capital city. We head towards the Zócalo (Plaza de la Constitución), one of the largest city squares in the world, built over the Aztec city of Tenochtitlan. There we visit the Catedral Metropolitana, the largest cathedral in the Americas and the seat of the Roman Catholic Church in Mexico. Built in sections over a period of two centuries, beginning with the conquistadors, the cathedral sits on top of a site of a sacred Aztec temple and uses the very stones of the Aztec temple in its construction, in a gesture of Spanish colonial triumph. Some of the excavated ruins of the Aztec temple underlying the cathedral’s foundations can still be seen to the left of the west wing, the ruins look like stepped terraces built out of lava rock and mortar. Inside the cathedral, huge, magnificent altars made of gold, testify to the richness of resources the Spanish found in their new world.

Still in the historic center of the city, we visit the Colegio San Ildefonso, a museum and cultural center, which houses more of the work of famous Mexican muralists Jose Clemente Orozco, as well as Diego Rivera and others. The main courtyard is bordered by columnated arcades, three stories tall, behind which are a long series of murals by Orozco, that depict themes having to do with post-revolutionary Mexican politics. You can see the influence of his early work as a political cartoonist at play here. The view from the courtyard, with the light shining on the colorful murals encased behind arches of dark stone, is magnificent. 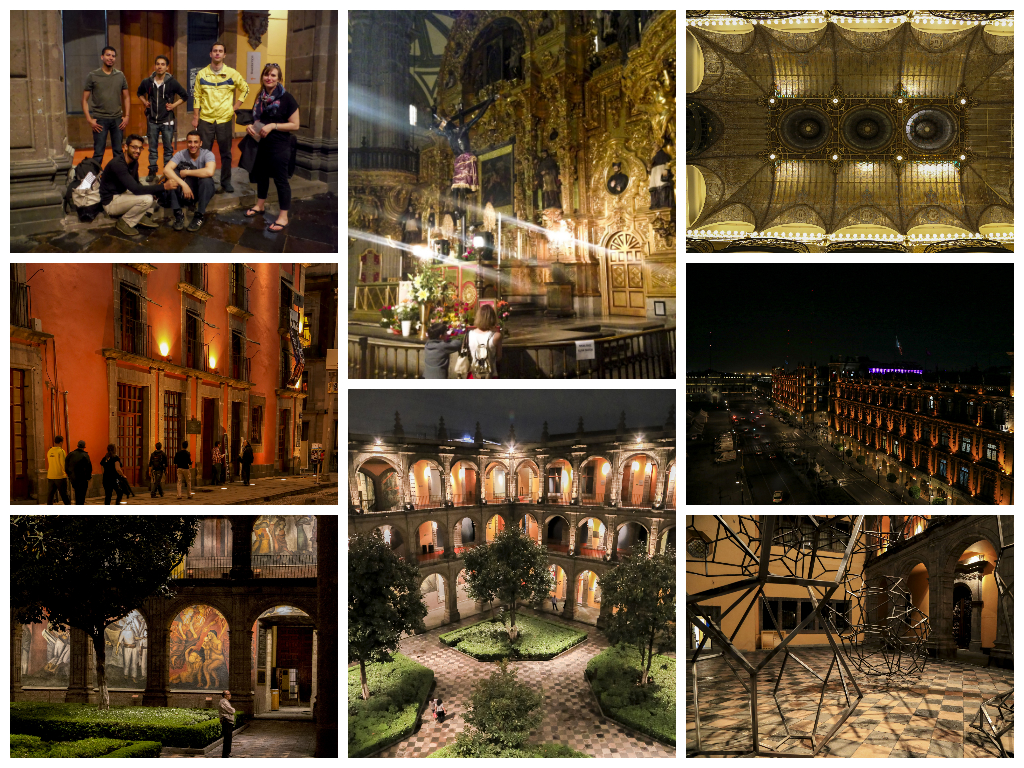 Over the Gran Hotel de la Ciudad de Mexico, a building resplendent with French art-nouveau style, we sit and have desert on a roof terrace overlooking the Zócalo. We order chocolate cake with chiles, spicy and rich, and cappuccino coffee. Wandering Mexico City at night, the streets are either empty or full of people and noise. The Zócalo is full of armed police, and parked ambulances, in preparation for the next day’s event or protest. Music pours out of many late-night businesses. The streets are narrow; the stone and stucco buildings are very old, some with deep pink facades that bend outward from age and wear. There is a kind of mood here that is difficult to describe. Here history seems very present, and dramatically lit in the dark.