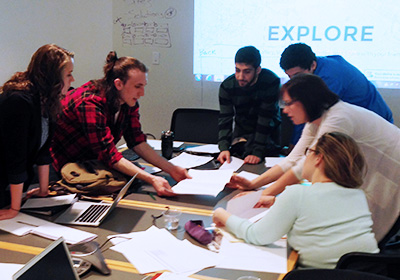 The Ada Louise Huxtable Fellowship in Civic Engagement and Service Learning is generously funded by a grant from OneWorld Boston, a grant-making entity of the Cummings Foundation. The Huxtable Fellowship is affiliated with the BAC's Gateway Initiative, a program that provides pro-bono design services by students and faculty to nonprofit and municipal agencies throughout the greater Boston area.

Christine Banister is a Master of Architecture candidate at the Boston Architectural College. Originally from the midwest, Christine received a Bachelor of Science from Indiana University, where she studied interior design and psychology. Upon graduating, she traveled around the country working for artists, floral designers, and event planners in cities including Miami, Minneapolis, and Seattle. Christine currently works at YouthBuild Boston where she teaches design to high school students through a team-based approach to real world architecture problems.

Mehran Jahedi Mehran is a Bachelor of Architecture candidate at the Boston Architectural College. In addition to being a 2015 Huxtable fellow, he works at the American Repertory Theater Scene Shop, where he engages in the fabrication, installation, and layout of scenic elements. His previous internships through the BAC's Gateway Program focused on historic research, preservation, and adaptive reuse in the Brookline and Chestnut Hill areas. These experiences deepened Mehran's strong interests in the social and cultural impacts of architecture alongside the more technical aspects of digital and physical fabrication processes, materials science, and construction methods.

Anna Mezheritskaya is a Bachelor of Architecture candidate at the Boston Architectural College. She was born in St. Petersburg, Russia and immigrated to California at the age of 10. Her interest in architecture began with a passion for visual arts and curiosity in mathematics and sciences in high school. After taking a few architectural courses at a community college, she was hooked and soon transferred to the BAC to pursue her degree. Academically and personally, Anna is interested in the holistic sociocultural impacts that architecture and design can have on communities. As a designer, she tries to incorporate opportunistic, systemic ideas into studio projects with the aim to generate multidimensional positive impacts on and beyond the project site.

David Morgan is a Bachelor of Architecture candidate at the Boston Architectural College. Originally from New Hampshire and Vermont, David spent most of his time roaming through the New England Mountains until he migrated his way to Boston in 2010 to study at the BAC. Where David calls home is a small town deep in the woods of Vermont. The town consisted of 37 people, 280 cows, and 1200 chickens. He helped maintain order by patrolling the lands since he was 4 months old, where he met his best friend and partner in crime, Artemis. Artemis was an elite prairie falcon that was a fixture in David's younger years, learning side by side with him until they parted ways and Artemis began a family of his own. After spending several years working in the construction field, David realized the power of architecture to represent our lives, experiences, and narratives.

Andres Rincon is a Bachelor of Architecture candidate at the Boston Architectural College. He was born in Bogota, Colombia but grew up in Norwalk, Connecticut. Andres realized he wanted to pursue architecture when he studied and experienced the works of Louis Kahn, Leon Battista Alberti, and Andrea Palladio. He attended Norwalk Community College in Connecticut, where he received an associate's degree in architectural engineering. After graduating, Andres worked with Massaro Architecture and Design Firm as a junior architect and as a consultant for ALEA Home and Garden Contractors, LLC.

Annika Nilsson Ripps is a Master of Architecture candidate at the Boston Architectural College. She holds a bachelor's of science in mechanical engineering from Worcester Polytechnic Institute. After beginning her career working in the medical device industry, she is now focused on improving and strengthening communities through spatial design. The Huxtable Fellowship will allow her to further explore how design can protect, nurture, and strengthen human engagement—both interpersonal and with the environment.