From the people that bring you The Atlantic, CityLab is a news source for all things urban. Co-founded by renowned geographer, Richard Florida (author of Rise of the Creative Class and Who’s Your CIty?), the site has a range of content from city politics to captivating infographics to to photo documentation of cities across the world. As both students in the world of design and residents to one of the most prominent cities in the United States, we need to constantly consider our own urban environment and that of cities everywhere.

The site is organized into several tabs for perusing their content, and has tabs that specifically present articles or posts with ‘Maps’ and ‘Photos’. Other tabs include, ‘Commute’, ‘Work’, ‘Housing’, ‘Design’, ‘Tech’, and ‘CityFixer’, a set of 12 categories including ‘Streets’, ‘Energy Use’, and ‘Infrastructure’ that are aimed at certain aspects of city life. The site is updated daily, so the archive of stories and posts is incredibly extensive. 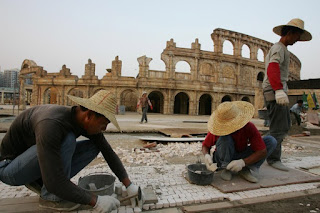 Recently, a post regarding China’s ‘copycat architecture’ caught my eye. The article discusses the prevalence of copycat architecture of the great monuments of the world. China has a Parisian town with an Eiffel Tower replica, a Great Sphinx, a Colosseum, a Thames Town modeled after London, and the most replicated building throughout the country... the White House.  The author looks into the trend of replication throughout China and discovers that the Chinese upper middle class sees these structures as moments of power. Their capacity to own their own version of the “greats” around the world is something that speaks the the power of China as a whole. Furthermore, many replica architects believe that through construction of these famous structures they might develop a mastery of their own in learning. 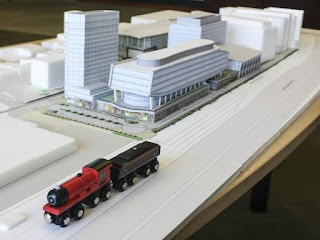 Upon searching ‘Boston’, I found an article that covers the proposal made by New Balance to create their own commuter rail station.  If you’ve recently driven on the Mass Pike or if you live in Allston-Brighton you’ve probably seen the giant tubular glass structure going up.  This 15-acre development site known as Boston Landing will be the new headquarters of New Balance, complete with an ice-skating rink, a track, several office spaces, a hotel, and 80,000 square feet of retail space. More than this, the company is going ahead with the creation of their own commuter rail station at Boston Landing, which they will fully fund and upkeep for at least a decade once opened.

CityLab is in an odd way a breath of fresh air for us design students. We spend most of our time looking at images and graphics, but it turns out reading is important too. And if we’re going to be reading, why not be kept abreast of things concerning cities like the one in which we live. CityLab holds that, “through original reporting, sharp analysis, and visual storytelling, CityLab informs and inspires the people who are creating the cities of the future—and those who want to live there.” And if reading the news isn’t your thing, perhaps you’ll enjoy their “visual storytelling”.