In the BACkground :: Boston's Old South

Just over a week ago, the BAC held commencement for 170 students in the disciplines of architecture, interior architecture, landscape architecture, and design studies in the Old South Church at the corner of Boylston and Dartmouth Streets. It seems fitting that students get to celebrate their hard work and achievements in these various fields of design in one of Boston’s very own Gothic Revival masterpieces.  This beautiful church has been home to the BAC’s commencement ceremonies for years, but the history of the church itself dates all the way back to 1669. This week, I dug a little deeper in looking to share the history and design of the Old South Church.  This brought me first to the Old South Meeting House. 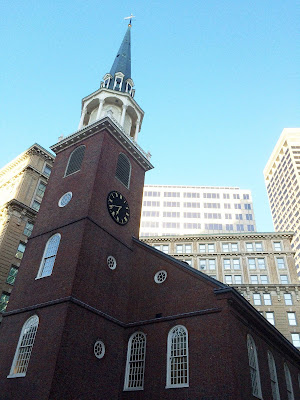 First formed as a group known as the Third Church of Boston, the congregation that would eventually worship out of the Old South Church began meeting in a small Cedar Meeting House in 1670, and soon moved to the (then new) Old South Meeting House by 1729 at the corner of Washington and Milk Streets by Downtown Crossing. Since 1729, the Old South Meeting House has played many parts in Boston’s rich history. The relatively modest Georgian building is most famously known as the organizing point for the Boston Tea Party on December 16, 1773. As the largest building in all of Boston at the time, the capacity to pack over 5,000 Bostonians into one building made for an apt meeting place. The Meeting House is a three story, entirely brick building fronted by a bell tower atop of which sits a wooden steeple. The large central meeting hall is a relatively simple space, bordered on three sides by a balcony of seating, and on two sides by third balcony. While the building dates back to 1729, the only structural element of the building that is original is the back staircase that leads to the balconies. The Meeting House has throughout history been a British horse riding school, a post office, and now a museum. Throughout all of this change, the building has undergone many renovations and plenty of reconstruction.  Notable congregants of the past include the likes of Benjamin Franklin, Samuel Adams, and William Dawes. While today the Meeting House exists primarily as a museum, it still continues to provide a place for people to meet and discuss important issues of the day. 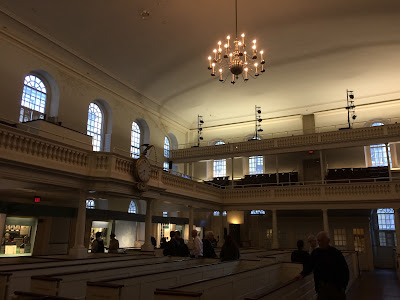 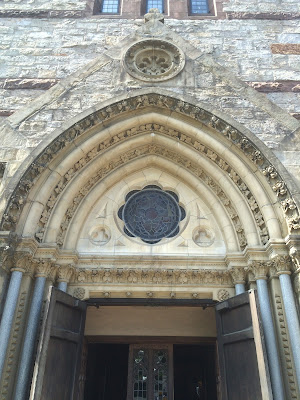 Completed in 1873, the “new” Old South Church is today one of the greatest examples of Venetian Gothic architecture in New England. The church is largely built out of puddingstone, and many arches and walls are banded with different colored sandstones. Probably the most notable feature of the church, the campanile, is a 246’ tower that houses the church’s over 2000 lb bell. The campanile speaks to the major Venetian influence of the design. While the tower that exists today is a reconstruction that dates back to the 1930s, the design replicated the original tower that stood before it. Another unique feature of the church is the lantern centered above the sanctuary.  This copper clad cupola is directly reminiscent of the Basilica of St. Mark in Venice. The cupola serves both an aesthetic and functional purpose.  A series of mechanically operated louvers open and close the twelve ornate arched windows, cooling the large sanctuary below. Both the exterior and interior of the church feature ornate decoration and a mix of several unique materials. Once inside, a beautifully carved Italian cherry wooden screen takes you from the narthex to the sanctuary, featuring ornate foliage and hidden creatures including snails, squirrels and owls. Elsewhere is carved limestone, stenciled plaster, and impressive stained glass. The plentiful details call for hours of further exploration, from the glass mosaics by Antonio Salviati to the purple tinted glass work of Louis Comfort Tiffany, founder of Tiffany & Co.  The Old South Meeting House and the Old South Church were designated National Historic Landmarks in 1960 and 1970 respectively, and together define a large part of Boston’s rich history. 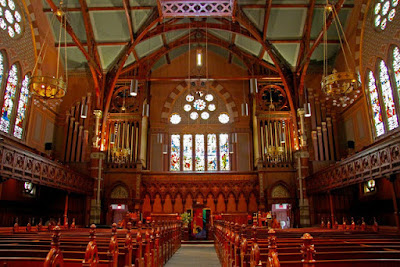