In the BACkground :: Reflection on Void

In the BACkground :: Reflection on Void
A series from Phil Reville, M. Arch Candidate


“I look forward to an America which will not be afraid of grace and beauty.” - John F Kennedy

Last weekend I took a bike ride down Mass. Ave, out along the Harborwalk trail through South Boston to the JFK Memorial Library at Columbia Point. The just under five mile ride from the BAC was a scenic one that I suggest everyone take, especially for a pitstop at Carson Beach. As you approach the Library from the Harborwalk, you can see what appears to be a giant black box bisected by an even larger white triangle. That… is the library. If you know anything about the architect, I.M. Pei, you know that he has a penchant for geometry. Designer of the famous pyramids at the Louvre, the Cleveland Rock & Roll Hall of Fame, and our very own Hancock Tower here in Boston, I.M. Pei is for many a household name. The 98 year old Chinese-American architect traces his own architectural roots back to Boston, as a graduate of Harvard’s Graduate School of Design under the direction of Walter Gropius. Since then, Pei has gone on to design dozens of the world’s most notable buildings. Yet, of all of the buildings he has ever designed, Pei considers the JFK Memorial Library the most important commission of his life. 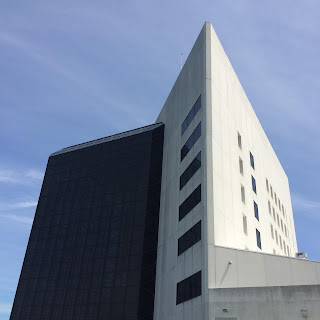 In 1963, president John F. Kennedy began the search for a spot in his home city of Boston for what would become his presidential library. Kennedy would be only the fifth president to have constructed in his name a library, but he had envisioned something of greater purpose. Kennedy wanted included in this grand plan archives, educational collaboration (with his alma mater Harvard), and a higher level of transparency with his time as president. Barely into the process of designating a location and designer for this great library, president Kennedy was assassinated.  This tragic event meant that his wife Jacqueline, leading a small committee, would take the reigns of the project that would now also stand as a memorial to her late husband.  In the search for architects, they shortlisted some of the world’s most renowned architects, including Louis Kahn, Alvar Aalto, Mies van der Rohe, and Franco Albini. The somewhat unknown I.M. Pei also made the cut. The eventual decision to choose I.M. Pei was entirely Jackie’s, and was said to be an emotional one. Jackie felt that Pei held promise, a great amount of creativity, and she connected with the man who was the same age as her late husband. 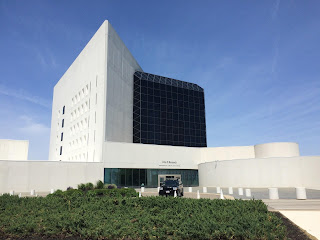 Once I.M. Pei was officially chosen as the project architect, the next decision regarding the placement of the library proved rather difficult.  Initial plans for the library to be located in Cambridge were met with great resistance, both from residents and Pei’s own alma mater.  Eventually, the project was moved to the nine-acre site at Columbia Point by the University of Massachusetts Boston campus where it sits today.  With the site determined, Pei got to work on a new, more site appropriate design. After nine long years, the John F. Kennedy Presidential Library and Museum was dedicated on October 20, 1979. While the final design was relatively well received, I.M. Pei himself was somewhat unsatisfied.  The pressure to design a building with such weight and the obstacles of the process itself weighed down on I.M. Pei, who ultimately wanted something greater for the president. In an interview with Gero von Boehm, Pei exclaimed, “I wanted to give something very special to the memory of President Kennedy. It could and should have been a great project."  While this was the case, the project went on to boost I.M. Pei’s reputation as a great architect. 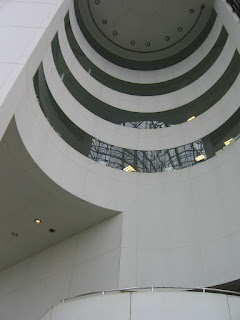 Construction along the Harborwalk by the museum meant a detour to the front of the building. From the street entrance, a large circular volume hidden from the waterside appears nested into the giant glass and steel cube that seemed black from a distance.  The clean lines of the “black and white” geometric shapes sharply contrast with the sky.  Once inside, the larger lobby opens up to the glass and steel cube with views to the harbor beyond. The large void aims to elicit a reflection aptly set for the late president. The connection with the outside world and home to the president is felt in uninterrupted glass volume. The museum and archive are themselves densely packed, ultimately bringing visitors full circle back to this large space, whereby one can truly reflect once having followed the life of the president through a rather constrained and rigid path. 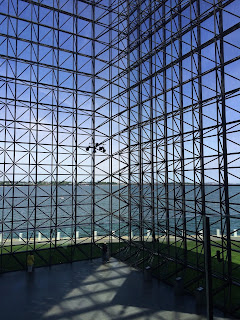 The great spaces that make up the large geometric volumes create a monumentality to the building that serves to truly define it as both museum and memorial. The circulation into and out of these large volumes allows the visitor to experience these spaces as new forms. In the end, these spaces are anchored on the large glass atrium, a space, just as with the president, to be revered. I.M. Pei is known for his mastery of glass and manipulation of light, and this space certainly speaks that truth. President Kennedy once said, “Those who look only to the past or present are certain to miss the future.” On my bike ride home, I gave some thought to that quote. We have a great task ahead of us as designers entering a world of unknowns, it’s time we all start planning ahead. 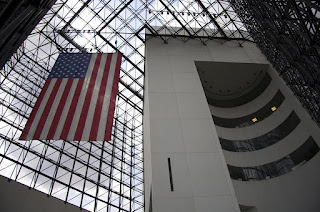 The JFK Presidential Library and Museum is open seven days a week from 9:00 AM to 5:00 PM. Unfortunately, the admission price for students is $12, but the grounds and the large atrium space are open to the public free of charge. For more information, visit http://www.jfklibrary.org/.