The Martin House Complex :: A Look Inside (and Out) 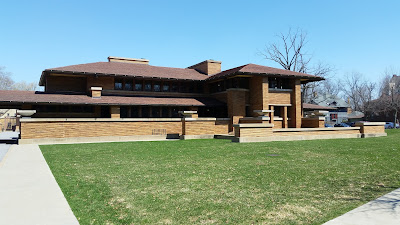 The Martin House Complex :: A Look Inside (and Out)
Buffalo, NY
Student Submission: John Poillucci, Bachelor of Architecture Candidate

The Martin House Complex in Buffalo, NY is one of Frank Lloyd Wright’s most notable Prairie Style projects. Built between 1903 and 1905 the complex was owned by Darwin D. Martin who played an integral role in assigning Wright to design the Larkin Administration Building, also in Buffalo. There are tours of this project of varying length led by guides who are fluent in Wright’s history and design intent. I would definitely suggest any BAC student interested in gaining insight on Wright’s Prairie Style homes.

The tour started in a nearby building with an open, glass façade where participants were shown a short film giving a general history of the Martin family and construction of the complex. The 29,080 square foot complex sprawls across the nearly 2 acre lot taking up much of the available area. From the outside there is an obvious effort to depart from a typical façade. The exterior is made of several undulating surfaces of art glass and long, roman bricks. These surfaces are sheltered by expansive, low-pitched roof that are supported by large, pronounced columns. 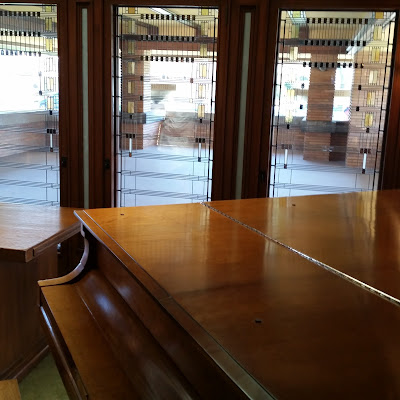 Many of these exterior elements are provided with the intent to express horizontality. The long Roman bricks are oriented horizontally, for example, creating several lines that read from left to right. Further, the horizontal mortar between the bricks is set back to further express these lines while the vertical mortar is nearly flush with the bricks to suppress and verticality. In combination with several other elements, the overall horizontal expression of the structure becomes clear.

Upon entry, the emphasis on horizontality begins to become clear as a method of blending inside and outside. Standing outside the front door you are in a semi-enclosed space, them once through the door you have several views of the outside. This is fostered by the large windows and close proximity of the floor and grade levels.

The interior is rich with several details crystallized in the same roman bricks as the exterior and dark woods. The project represents Wright’s thoroughness in design where most of the furniture is custom made for the complex along with the art glass windows, many of which are original. One of the most stunning moments in the home is in the waiting room where you will find one of the few circular designs in the home with a sunburst fireplace. Since it was a nice day our tour was also fortunate enough to see how light passes through Wright’s art glass, reflects off a surface on the window sill and onto the ceiling creating an unexpected, colorful play of light. 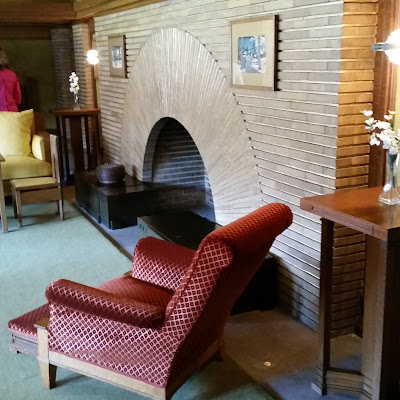 The tour definitely provided valuable insight into the Prairie School and Wright’s ideas on American architecture at the time. It is definitely a far cry from the awareness of sustainability today with Wright’s extensive use of structural steel as learned from making skyscrapers in Chicago, rare woods and large bricks. Alas, the design is unique and would be a rich experience for a design student to see Wright’s clever play of space.
Field Trips Student Features Student Submissions