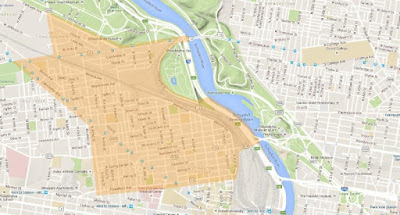 Celebrating 10 years with $10,000 in prizes! On October 2nd 2015, the Philadelphia Center for Architecture's Ed Bacon Memorial Committee will launch the 10th annual Better Philadelphia Challenge, an urban design competition open to individuals anywhere in the world. In celebration, we are doubling the size of the competition by opening it up to professionals for the first time. Twice the entrants, twice the prizes! College student and professional entries will be judged separately, with a $5,000 First Prize for each. Organize a team today!

The Mantua/Belmont section of Philadelphia was chosen as one of President Obama's first "Promise Zones" for economic development - one of only five in the country. This neighborhood is bordered by some of Philadelphia's largest institutions (the University of Pennsylvania, Drexel University, the Philadelphia Zoo, and Fairmount Park), as well as by large industrial sites (most notably the AMTRAK rail yards). As part of this neighborhood's development, what physical design interventions could encourage healthy and active lifestyles, thereby improving public health among residents?