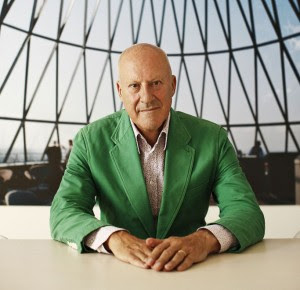 Biography
Norman Foster was born in Manchester. After graduating from Manchester University School of Architecture and City Planning in 1961 he won a Henry Fellowship to Yale University, where he was a fellow of Jonathan Edwards College and gained a Master’s Degree in Architecture.

Established as Foster Associates in 1967 his practice, now known as Foster + Partners, is an international studio for architecture and design with projects on six continents. Over the past five decades the practice has pioneered a sustainable approach to architecture and ecology through a strikingly wide range of work, from urban masterplans, public infrastructure, museums, airports, civic and cultural buildings, offices and workplaces to private houses and product design.

Projects include the Museum of Fine Arts in Boston, the redevelopment of the Reichstag, the New German Parliament in Berlin; the Great Court of the British Museum in London; the Clark Center at Stanford University, California and the new School of Management at Yale University, Connecticut; Hearst Tower, New York; the Hongkong and Shanghai Bank in Hong Kong, and airports in Beijing, Hong Kong and London. The practice has also developed sustainable masterplans for cities around the world, including Masdar City in Abu Dhabi and London’s Trafalgar Square in London. Current projects include a new London headquarters for Bloomberg, the new Apple Campus in Cupertino, Comcast Innovation and Technology Center in Philadelphia and several high-rise buildings in New York.