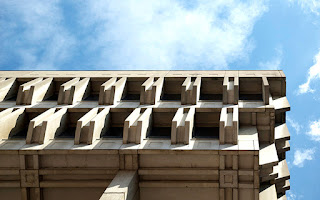 The BAC invites you to join us for the opening reception of Concrete Visions on Friday, March 4 at 6 pm, featuring a gallery talk by BAC alumna Anastasia Lyons and Chris Grimley of over,under. This event is free and open to the public.

The 1960s in Boston brought rapid change that transformed the urban fabric, aiming to create a "New Boston" after decades of stagnation. Vast areas of the city were modernized, often using architectural concrete as a material, in an attempt to reinvigorate Boston's economy and its self-confidence. This exhibition focuses on two design competitions—Boston City Hall (awarded in 1962) and what was then the Boston Architectural Center (awarded two years later)—as milestones in shaping not only the physical nature of the city, but also how it would conceive its own future. The competition format offered a process for commissioning based on design quality and innovation rather than political connections or perceived expertise.

Both competitions involved a wide range of submissions that were vetted by distinguished juries seeking new expressions for important buildings—one the seat of municipal government, the other a home for design education. This process was meant to free City Hall's design from political encumbrances, and it resuscitated competitions as a method of selection for the first time in a generation on a municipal structure of this scale in the United States. Building on that legacy, the BAC competition organizers hoped to "further increase people's awareness of this method of architect selection devised for the single benefit of all architects, of architecture, and of the people at large." In creating the first modern building in the United States designed and built exclusively for the professional study of architecture, they called for submissions "of such quality as to command not only widespread attention but respect as well."


Both competitions were conceived with lofty aspirations—for democracy at City Hall and for learning at the BAC. Lessons from this earlier decade are instructive today at a time when our building boom has generally lacked architectural imagination or civic investment. These competitions enabled innovative and untested architects to land major commissions, encouraging the highest caliber of work by involving juries composed of internationally recognized academics and practitioners. Concrete Visions unearths many aspects of both competition processes, such as their aspirational competition briefs, imaginative but unchosen submissions, as well as wide ranging professional and public reactions. These many narratives provide deeper context for understanding the visions that were ultimately selected, built, and that contributed to the making of the New Boston.