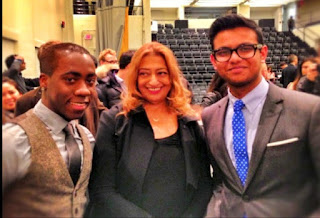 "I have never known anyone whose reputation provoked more terror yet whose actual presence was more fun than Dame Zaha Hadid’s. There have always been difficult personalities in architecture. The profession itself seems calculated to make one egotistical and intractable. But it always amazed me that Hadid had somehow attracted a singular reputation for being difficult to deal with. Compared with other prominent architects, no one was more down to earth, more exuberantly real, than her.

On the occasions that we spent together when I was working on my 2009 Profile and then, more recently, at a 2015 New Yorker Festival event, I was struck anew by the warmth and humanity that this supposed harridan radiated. The scary starchitect of popular imagination was just that, a fiction. Why was it necessary? Why did every second article attach “diva” to her name? Isn’t every architect a diva?

Truly, it was because Hadid was a woman who had dared to enter a man’s world, and took no shit from anybody, though plenty was offered. She had to be twice as smart and three times as tough as her male counterparts in order to get anything built. And even then she struggled for years to realize her projects, and was forced to endure cruel and humiliating referendums on such thwarted projects as the Cardiff Bay Opera House, or the ongoing Olympic-stadium debacle in Tokyo, in which the government blocked Hadid’s competition-winning design from going forward after protests from prominent Japanese architects.

In later years, developing cities were eager to offer her prize commissions, but in the U.K., her adopted country, she was never fully embraced. In the U.S., as well, her work is scarce, and while New Yorkers can at least be thankful that one Hadid work will be completed—her eleven-story luxury condo building, on West Twenty-eighth Street—this morning’s sad news leaves one filled with regret that this city didn’t embrace her genius sooner. Perhaps it is fitting that the only city in the Western Hemisphere to commission a Hadid skyscraper, Miami, was the place where she died of a heart attack this morning. The building will stand as her monument."

To view Seabrook's profile of Hadid from 2009, click here.