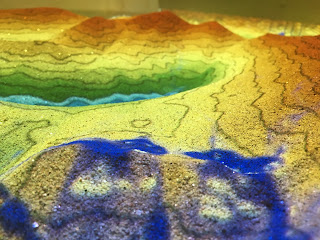 A team of BAC students, faculty, and staff have worked together to build our first prototype of an augmented reality sandbox!

Utilizing a short-throw projector, Xbox Kinect sensor, and a computer tower running a Linux script developed originally at University of California Davis, the AR sandbox delivers real-time interpretation of sand topography as a color range and topographic linework.  The AR sandbox also allows for hydrological simulation via a ‘flood’ command, and generates a ‘rain cloud’ when users hover their hand over a zone within the projection. This tool will be used in site design, grading, and studio courses in our architecture and landscape architecture programs.